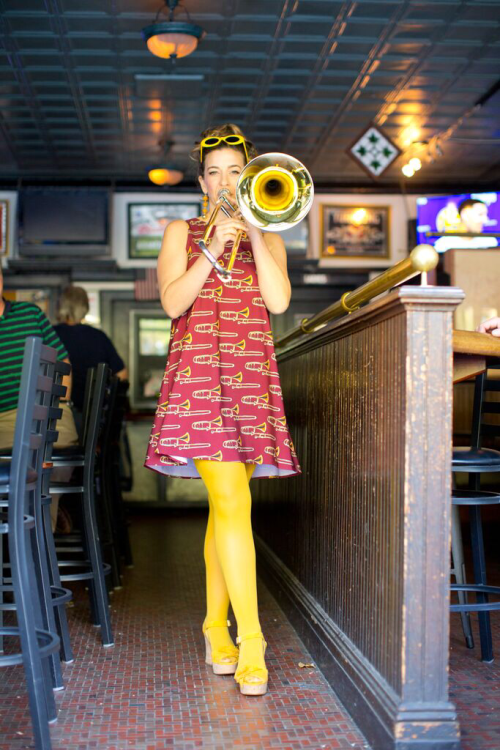 slideshow
A couple of weeks ago while flying through Facebook, I saw on photographer John Abbott's page that he'd just finished a shoot with bass trombonist Jennifer Wharton. I've known John for years and in addition to being a great guy, he's a marvelous portraitist. When I asked him about Jennifer, he wrote back, “Jen Wharton is a fantastic musician and a cool person. I’ve done her last two covers for her band, Bonegasm. She’s probably a great interview." He was right on both counts—cool and a great interview. Thanks, John!

Jennifer's latest album, Not a Novelty (Sunnyside), backed by her group, Bonegasm, is everything you'd want from a four-trombone frontline. If you love the brassy, jaunty sound of trombones soloing and harmonizing hard, this one will knock you out. The tracks are all originals by members of the band: BonGasmo, Face Value, Ice Fall, Blue Salt, Union Blues, Twinkle, Manta Rays, La Otra Mano, Little Cupcake and The Day I Tried To Live.

Jennifer is on bass trombone throughout and is joined by trombonists John Fedchock (her husband), Nate Mayland and Alan Ferber, with Mike Eckroth on piano, Evan Gregor on bass, Don Peretz on drums, Samuel Torres on percussion and vocalist Kurt Elling The Day I Tried To Live.

Superb playing by Jennifer and the band. They shoot for the combined trombone sound you want to hear—high energy, tight cooperation, a heavy bottom, serious wailing chops and a passion for four-part harmony.

Naturally, Jennifer's album, Not a Novelty (go here or here), made me curious:

JazzWax: Where did you grow up?

Jennifer Wharton: I grew up in Pittsburg, Ca. No one played instruments at home, but my dad had a huge record collection. My school district started kids off in middle school with choir and recorders, and I did both. When I got to junior high, I wanted to play sax but Danielle, my older sister, said I was copying her, so sax was out.

JW: The trombone was a second choice?

JW: Yes. The second year I was in band, I missed the day they held auditions for trombone chairs, so I got stuck in the last one. The music teacher handed me a bass trombone, and I actually dug it.

JW: Were there hurdles to overcome?

JW: I actually quit playing when I started high school. My parents said only nerds played in band. So obviously a lack of parental support was a huge thing to get over. About halfway through my junior year at Pittsburg High School, I decided I missed playing.

JW: The band director remembered I’d played bass trombone in junior high and put me on the instrument and pushed me to learn tuba. I played in the concert and jazz bands for two semesters and the marching band for one.

JW: When did you realize music was going to be a career?

JW: One day I was lamenting to Orrin Cross III, my high school music teacher, that I wasn't good enough to be a music major in college. He said, “Yes, you are." It was the first time an adult believed in me. That was all I needed.

JW: Where did you study after high school?

JW: First at Los Medanos Junior College in Pittsburg, Ca., and then at the New England Conservatory in Boston. Now I’m getting my long overdue masters at New Jersey City University in Jersey City, N.J. I was lucky that most of my mentors and band directors saw something special in me. I don't know if they truly did, but it seemed like they thought I had potential. The first time I didn't get that from a teacher was a giant drag.

JW: How have you maintained your powerful breath control?

JW: I used to compete in triathlons, so I was swimming, biking and running multiple times a week for about 12 years. I never had to do any kind of breathing exercises. My left hip hates me now, so all I can do is light biking and swimming. Pools closed when Covid arrived in March 2020.

JW: You have extraordinary credentials. What was your first big break?

JW: Being hired to play the pre-Broadway run of Wicked in San Francisco. Once I got my foot in the musical-theater door, I added more shows to my resume and moved to New York to try my luck. I was playing in the pit band of West Side Story before Covid struck. I hope we reopen this year. All along the way, I also played in big bands, so that was my happy place.

JW: What is it about the bass trombone in particular?

JW: The low notes are so cool. I love the meatiness of the instrument. It’s endlessly appealing to me.

JW: As a woman, were you given a hard time in the bass trombone chair?

JW: Yes. Many people in the professional world still think the trombone is a man’s instrument and that you need “balls” to play bass trombone. In other cases, fellow musicians have inferred that I only got hired for the chair because so-and-so wanted to have a relationship with me. Or they assumed I had a relationship with the person in charge to get a specific gig. Awful stuff. The music world still has work to do.

JW: What is your response in those situations?

JW: There’s not much you can say. Success is always the best revenge. That’s when I get to shove preconceived notions down their throats.

JW: You got to know bass trombonist George Roberts?

JW: In college, I spoke with him by phone for my own gratification. He was the one person who had mastered what I wanted to do. He wasn’t classical or jazz. He just was a great instrumentalist. When I called him up, we talked for over an hour. He was so giving of his time and so encouraging. This was especially kind of him since he didn’t know me and we had never met. In turn, I’ve tried to be as giving of my time and as supportive as I can be for musicians coming up who reach out. My theory is George sounded beautiful because he was a beautiful person.

JW: What are some of your favorite bass trombone tracks? JW: Off the top of my head, here are five:

JazzWax clips: Here's Jennifer in a promo doc for Not a Novelty (Sunnyside)...

And here's a promo for her last album, Bonegasm (Sunnyside)...