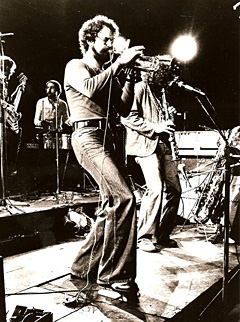 He began his musical career in Newcastle in a band led by his brother Mike. Among the younger musicians he played with were John McLaughlin, Eric Burdon and Alan Price.

When he moved to London he co-led a quintet with sax player Don Rendell. His LPs with Rendell and with Michael Garrick, The New Jazz Orchestra and Neil Ardley in the late 60s are amongst the finest ever produced in the UK and fetch huge sums on Ebay.

In the 70s he led the pioneering British Jazz Rock band “Nucleus", (one of the first fusion bands) which included John Marshall, Chris Spedding, Jack Bruce, Alan Holdsworth and Karl Jenkins among others. His Nucleus records are heavily sampled by the Bass'n'drum generation because of the superb bass lines he wrote.

After recovering from a serious cancer operation in the early 1980s, he worked extensively with Nucleus, the George Russell Orchestra, Michael Gibbs and the United Jazz Rock Ensemble, which included Charlie Mariano, Kenny Wheeler and Albert Mangelsdorff.

His later works included a suite for Nucleus members and a string orchestra and a duo recorded in Southwark Cathedral playing solo trumpet accompanied by John Taylor on the Cathedral organ.

An accomplished author, he wrote the recently re-published Music Outside a polemical study of British jazz in the early 1970s Later, he wrote the definitive musical biography of Miles Davis, widely regarded as among the finest jazz musical biographies. He followed with a biography of Keith Jarrett and co-wrote The Rough Guide to Jazz. Working with the film director Mike Dibb he made the TV films The Miles Davis Story (EMMY Award, released on Sony DVD) and Keith Jarrett: the Art of Improvisation.

He made numerous BBC Radio programmes as musician and critic.

As an influential and selfless educator he ran workshops for a musical charity which were hugely formative on a whole generation of British Jazz players such as Julian Joseph. Later, as a Professor at the Guildhall School of Music, he taught another generation of young players.

He received Lifetime Achievement Awards from Parliament and the BBC. His biography by Alyn Shipton Out of the Long Dark was published in 2006.

Carr had been suffering from a long illness, which left him unable to play or write. He died peacefully with his daughter Selina and his old friends, drummer John Marshall and wife Maxi, and trumpeter Kenny Wheeler by his bedside.