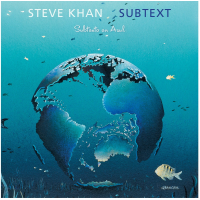 slideshow
With Subtext, the unique trajectory of Steve Khan’s musical story expands and evolves, while re-asserting its linkage to the broad sweep of a fascinating discography, one off to the side of conventional. In short, Khan’s body of recorded work affirms that common ideal and true ambition defining jazz artistry: to create a personal, identifiable voice.Ever the artist-deserving-wider-recognition, Khan has mastered a signature sound of his own devising, involving the inspired blending of touch—by turns feathery and pointed—angular yet emotive phrasing, an original sense of note choice and a certain searching, enigmatic sensibility in his playing and musical thinking. He has created his own special milieu in his solo work, often seizing the beauties and possibilities of a spacious setting—moving nimbly and with an exploratory spirit atop lean, chordless and, frequently, Latin-ized foundations.

In some ways, Subtext finds Khan attending to the business of his personal musical passions and research. Part of the sum effect has to do with the carefully-chosen company he keeps, a strongly Latin-leaning and percussive-heavy rhythm section featuring his longtime compadre, drummer Dennis Chambers, in the section in synch with the all-star Latin team of Marc Quiñones, Bobby Allende, and Rubén Rodríguez, all of whom Khan has known since the '90s. “I was familiar with their names and work,” Khan comments, “because of all the salsa that I had been buying and listening to during those years. They seemed to be on everything.” Although these musicians have individually graced past Khan records, Subtext marks the first time all have convened. Khan enthuses that, “with Marc, Bobby and Rubén all present, everything has come full circle. I'm making this recording with the guys who had been my teachers for so many of the wonderful aspects of Latin music. I'm still just a beginner, but thanks to them, I know a little bit now.”

Call it an artistic cocktail of beginner’s mind and veteran’s wisdom, a freshness mixed with depth of expression. On Subtext, Khan embarks on further explorations with some favorite composers/artists he has dealt with in the past - Ornette Coleman, Wayne Shorter, Thelonious Monk. Also, in the wings of influence, Khan nods respectfully towards the late, great arranger/pianist Clare Fischer. He also leans into the challenge of presenting new originals, each of the three in its own conceptual place, and, on the luminous bolero take on “Never Let Me Go,” showcasing his sensitivity in the art of ballad playing. That track, along with the “title track” of Khan’s soulful and sophisticated “Blue Subtext,” nod in tribute to the harmonic concepts of Fischer.

These perhaps seemingly disparate pieces add up to an elaborate, but internally logical puzzle, not to mention a pure, good listen. Khan is an artist who takes great care and forethought in creating an album, which, in this piecemeal listening-habituated world, hangs together as a meaningful musical statement. Throughout, there are touches of self-reflection from his musical life so far and his deep listening, from the opening of Ornette Coleman’s wily infectious free-bop tune “Bird Food” (featuring old pal Randy Brecker) to his ripe run through Hubbard’s “Baraka Sasa” and the tangy Joe Zawinul-esque flavors of the closing Khan original “Bait and Switch.”

That finale, over nine minutes long and sporting a roiling Chambers drum solo, is a cha-cha-cha akin to the original “Change Agent” from Khan’s 2010 album Parting Shot, but with a distinguishing difference or three (he tends to be averse to repeating himself or leaving a new challenge unmet). Khan sees the tune’s pulsing groove and spidery head as containing echoes of Zawinul, in whose post-Weather Report band Weather Update the guitarist was enlisted.

From another angle on the Weather Report legacy, Wayne Shorter has long been a favorite for Khan. Here, he revisits the Shorter ballad “Infant Eyes,” which the guitarist recorded in a lyrical, acoustic guitar mode on his Evidence album in 1980, but re-contextualizes on this album in an Afro-Cuban 6/8 groove. As Khan explains, the new feel “started to appear in my imagination, and I realized that this song could be played that way and still retain its wonderful sense of romance and beauty, and yet be transported to a very different place because of these fantastic rhythms.”

Monk’s songbook again rears its timeless head, as it has on many a Khan album, this time in a freshened-up songo style version of “Hackensack,” which the guitarist last recorded on his 1992 album Headline. In his impressive solo, Khan handily demonstrates his fluidity-in-motion as an improviser, wittily adapting quirky, Monk-ish geometries and criss-crossing linear and chordal playing, one of Khan’s identifying attributes.

A different kind of reinvention process is employed in his version of Osby’s “Heard,” with the brand of serpentine melodic line the M-BASE co-architect Osby is expert at penning. Khan’s challenge, nicely accomplished, was to “try to come-up with an arrangement that would respect Greg’s writing but also convert the song more fully towards Latin music.” In that process, he had some orchestrating and coloration help from regular creative partner, keyboardist/producer Rob Mounsey. For the infectious “Cada Gota de Mar,” Khan’s winning effort to tap into the Colombian Vallenato idiom and a creative collaboration with Uruguayan singer Mariana Ingold, Khan also called on the deft accordion gifts of Gil Goldstein.

Each of the elements and layers on this album could qualify as a “subtext” or aspect in a cohesive musical whole which makes Khan who he is. He is, and has long been, a jazz guitarist with tentacles in the various musical impulses he has delved into, artfully connecting the dots there-between and making a sound and a voice to call very much his own. – Adapted from the Liner notes by Josef Woodard