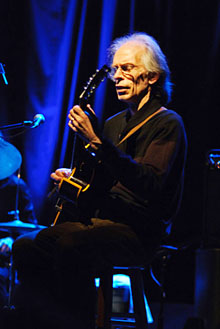 slideshow
Steve Howe has been a major figure in contemporary music for over 40 years. He first came to international prominence with Yes; he's a key figure in rock supergroup Asia; and his distinctive guitar style makes him one of the most recognizable players on the scene. His love of jazz is less well-known but it has been a crucial part of his life since he was a teenager. His work with the Steve Howe Trio now gives him a chance to interpret some of his favorite jazz compositions.

Howe has been touring recently, in support of his latest release, Travelling (HoweSound, 2010), an album which, in the classic guitar-organ-drums jazz trio format, not only delivers the goods with some new Howe compositions and jazz standards from Kenny Burrell and Jimmy Smith, but even revisits classic Yes tunes “Close to the Edge" and “Siberian Khatru."

AAJ Contributor Bruce Lindsay spoke to the veteran prog rocker about his unmistakable jazz roots, his passion for guitarists like Wes Montgomery, Barney Kessel and Charlie Byrd, and his current trio featuring organist Ross Stanley and son Dylan Howe, on drums. The result is an in-depth interview, Steve Howe: Great Guitars and Great Guitarists, that focuses more heavily (and uncharacteristically) on Howe's jazz proclivities, rather than his better-known work in the rock world.

In addition, you can read Bruce's insightful review of Travelling, also published today at AAJ.

AAJ is committed to bringing you the most extensive coverage surrounding new releases anywhere, so be sure to check out the buzz surrounding Steve Howe and Travelling today at AAJ!