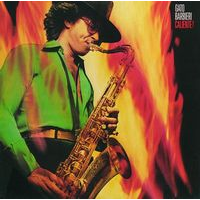 slideshow
New York hit 90 degrees yesterday with 50% humidity. Though it's summer, the city hasn't really experienced that much heat this summer. At any rate, down came the shades, on went the air conditioning and I decided to spend my writing day listening to tenor saxophonist Gato Barbieri. The album that I kept coming back to was Caliente! (1976), though I love Que Passa (1997) and Barbrieri's magnum opus, Last Tango in Paris (1972).

Caliente! was recorded for A&M Records at the height of the jazz-fusion and disco eras and was produced by Herb Alpert. Barbieri plays with sizzling heat—channeling later Sonny Rollins, John Coltrane and Archie Shepp but relying largely on tango-infused Argentinian folk expressiveness. Miraculously, Caliente! is a perfect album—meaning every track is engaging, beautifully arranged and splendidly executed.

What I love most about the album is how Herb [above] smartly envisioned soothing strings and funk against Barbieri's rattlesnake sound. Most of the lyrical songs are by Barbieri, except for Europa (Carlos Santana), I Want You (Leon Ware) and Behind the Rain (Herb Alpert). In some ways, the album's success became a model for Herb's own instrumental Rise (Andy Armer, Randy Badazz Alpert), which became a massive hit in 1979.

I'm not sure what Barbieri is up to these days. His site hasn't been updated in some time. I suspect he's still touring someplace in the world and driving audiences wild.