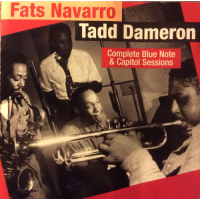 slideshow
Trumpeter Fats Navarro was the link between Dizzy Gillespie and Clifford Brown. Navarro was in awe of Gillespie in the 1940s, particularly his fingering on the trumpet's valves. For Navarro and many bebop trumpeters, they were enamored of Gillespie's short cuts on the valves to produce pure notes. While Navarro modeled his own bebop approach on Gillespie's, he played harder, stylistically, as if pushing the notes out. Gillespie was more about dancing up and down the scales with elegance and a spray of high notes. Navarro's notes were fleshier, with bursts, ornamentation and longer lines that Brown would pick up and develop in the early '50s.

As an in-demand leader in New York, the pressure and competition led Navarro to develop a weight problem, heroin addiction and tuberculosis. Hospitalized in July 1950, he died five days later at age 26. He was buried in an unmarked grave. Finally, in 2002, friends and family members erected a headstone.

If you consider Navarro a Gillespie protegee and a prototype for Brown, listening to him on studio and live recordings becomes fascinating. Especially interesting were Navarro's recordings with composer-arranger and pianist Tadd Dameron in the late 1940s. Navarro's articulation was romantic and bouncy, and perfectly suited for Dameron's gently assertive, nostalgic works. Prime examples are Our Delight, Good Bait and Lady Bird. Musicians on their studio recordings included the finest young jazz players of the bebop revolution—Charlie Rouse, Wardell Gray, Allen Eager, Kai Winding, Dexter Gordon, J.J. Johnson, Sahib Shihab among others.

Live dates followed, including Dameron's group at New York's Royal Roost in 1948. The band featured Fats Navarro (tp), Rudy Williams (as), Allen Eager (ts), Tadd Dameron (p), Curly Russell (b) and Kenny Clarke (d). As you'll hear, it was an extraordinary sextet. Navarro's final recording came in June 1950, a month before he died. Navarro was taped playing with Charlie Parker (as), Bud Powell (p), Curly Russell (b) and Art Blakey (d) at Birdland. A short, sad life but one that left us with extraordinary music if you make time to listen carefully to it.

JazzWax clips: Here's a roundup of Navarro tracks, starting with a session in Billy Eckstine's band...

Here's the complete album, Live at the Royal Roost...