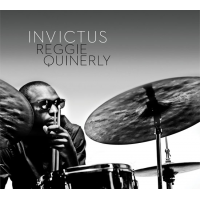 slideshow
Drummer/composer Reggie Quinerly made an indelible impression on the jazz world with his 2012 debut recording, Music Inspired by Freedmantown, a soulful and serious-minded tribute to the historic African-American neighborhood in Houston where he grew up. For his second CD, Invictus, which will be released by the drummer’s Redefinition Music label on March 17, Quinerly takes inspiration—and the CD’s title—from the 1875 poem by William Ernest Henley (“I am the master of my fate / I am the captain of my soul”).

“Many of today’s artists face great uncertainty,” Quinerly observes in the new CD’s notes, “...and while critics, musicians and fans continue to debate the commercial sustainability of an entire industry, I firmly believe its sustainability rests solely within us creators: no matter who is (or isn’t) listening, we must persevere, we must create and we must document, because only that which is documented lives on.”

Invictus demonstrates with its very different musical demands just how much Quinerly has developed into a balanced yet ever-evolving artist. The album surrounds him with a brilliant young cast: vibraphonist Warren Wolf, regarded as one of the most exciting players on the instrument in years; prodigious pianist Christian Sands; rising guitarist Yotam Silberstein; and lyrical bassist Alan Hampton. One of the wonders of Invictus is how much freedom the compositions allow these ravishing soloists while staying inside its textural designs.

Quinerly had this particular instrumentation in mind from the start, crafting compositions that took into account the sonorities and lyrical abilities of each player. Wolf is showcased on the album opener “Tavares,” dedicated to Horace Silver and “rooted in tradition with a certain earthiness.” Bassist Hampton, Quinerly’s high school classmate and “one of my favorite musicians to work with,” is the soloist on the melodic “Nimzo Indian,” named for the chess strategy. Guitarist Silverstein is featured on the ballad “Variation 24,” and Sands on the solo piano piece “Kunst Uberlebt” (Art Survives). On Reggie’s arrangement of “My Blue Heaven,” the disc’s only nonoriginal, the leader tips his hat to another musical influence, the illustrious pianist and composer Mary Lou Williams.

“As a composer, the melodies you write are like parts of your identity, like your name,” says Quinerly. “If a melody is not done right, if the notes are not played properly, it’s like mispronouncing your name. but all the musicians on this project pay special attention to properly interpreting the intended themes.”

Reggie Quinerly, 34, was born and raised in Houston’s Fourth Ward—once known as Freedmantown—and attended the High School for the Performing and Visual Arts, where his classmates included Mike Moreno, Robert Glasper, Eric Harland, Jason Moran, and Alan Hampton. After graduation he headed for New York City, enrolling at the Mannes School of Music at New School University and studying there with Jimmy Cobb, Lewis Nash, and Kenny Washington. He earned a B.A. from Mannes and later an M.A. from Juilliard, both in Jazz Studies.

The first CD release show for Invictus will take place on Wednesday 3/25 at Smoke, 2751 Broadway, New York City, when Quinerly will lead a quartet comprised of Jaleel Shaw, alto saxophone; Lawrence Fields, piano; and Alan Hampton, bass. Additional dates are in the works.