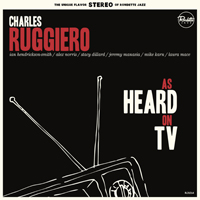 “Show tunes have always been the perfect platform for jazz. The Great American Songbook—the standard repertoire—is almost entirely made up of music written for Broadway. There's a reason for that...

Well, it's not 1961 anymore, and although it is as popular as ever, the bright lights of Broadway have been dwarfed by the LED lights of the television screen. In 2015, the small screen reigns supreme. “Oklahoma!" has been replaced with “Dallas" and “On the Town" with “Sex and the City". Shows today are 13 episodes a season rather than 2 acts. Thankfully though, show tunes remain show tunes. Quick, catchy, malleable, and popular... Everything you want in a musical canvas." —Excerpt from As Heard On TV liner notes by Charles Ruggiero, July 2015

Ruggiero's footprint into professional jazz began at a young age when, at 23, he toured with Chuck Mangione. He has performed with jazz artists such as Molly Ringwald, Brad Mehldau, Bob Reynolds and Peter Bernstein as well as toured with rock bands Slunt and Circus Diablo. Ruggiero has been featured on numerous recordings and regularly plays throughout the world spending extra time in New York City and Los Angeles. He is endorsed by Zildjian, Yamaha and Remo.

About As Heard On TV

“When you listen to Charles, you hear the past as well as the future. You want to know what 'Good Times' is? It's the way he plays it!" —Gregory Hutchinson

“Ruggiero crushes. One of the hardest swinging drummers on the scene.” —Brian Charette

“I'm lovin' the record. I knew it was KILLIN' when my daughter came out from her room and said to me 'That's the iCarly song.'” —Jonathan Blake