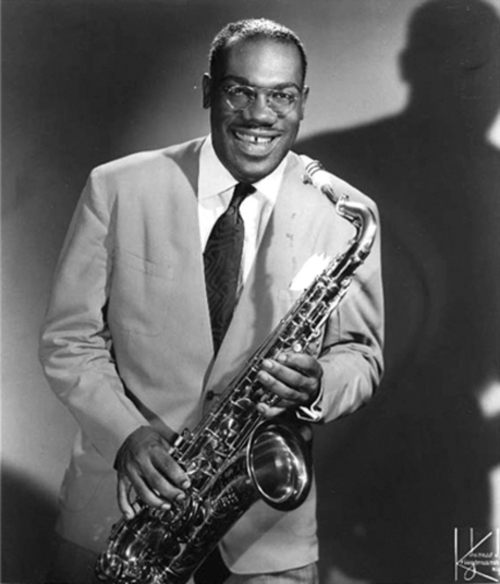 slideshow
A careful look at a jazz discography always yields an interesting historical story. Back in the late 1940s, many jazz artists had their start in R&B and jump blues bands. The groups were often smartly organized jazz-blues hybrids that played tightly arranged charts and regularly toured, ensuring they'd be well-oiled recording artists. Bull Moose Jackson led one of those bands. A veteran of the Lucky Millinder Orchestra in the mid 1940s, Jackson formed his own band in 1947.

Born Benjamin Jackson in Cleveland in 1919, Jackson started out on violin but soon gravitated to the saxophone. While in high school, he formed the Harlem Hotshots and was soon snapped up by Lucky Millinder. There, he picked up his nickname based on his size and facial features. Jackson also sang for Millinder, who convinced King Records to sign him as a solo R&B artist. That led to the formation of Jackson's band, the Buffalo Bearcats, which recorded in a range of styles, from bawdy novelty numbers to R&B ballads.

But by 1955, jazz-flavored R&B began to run out of steam as rock 'n' roll surged and the electric guitar replaced the saxophone. Jackson's recording output slowed and he didn't resume his studio work until 1960. By 1962, he mostly performed at parties and then worked in Howard University's cafeteria. He came back in the 1980s and recorded his last show in 1988.

Listening to Jackson today, his music holds up well. His bands had enormous energy, a sense of humor, superb musicianship and solid vocals by Jackson. His big hits included All My Love Belongs to You, I Can't Go On Without You, Why Don't You Haul Off and Love Me and Big Ten Inch Record. If you listen carefully, you'll hear where many jazz musicians developed their performing stamina and playing style.

Here's I Never Loved Anyone But You, with Benny Golson on tenor saxophone, Tadd Dameron on piano and Jymie Merritt on bass in 1951...

Here's Meet Me With Your Black Dress On, with Charlie Rouse on tenor saxophone in 1953...

And here's Hodge Podge from the same 1953 session with saxophonists Bull Moose Jackson and Charlie Rouse...