Bull Moose Jackson's hit records in the 40's and ‘50’s were such lively, good-natured, toe-tappin' tunes that today, over 60 years later, they still draw new fans to the field of Rhythm & Blues. An originator of the Honkers and Shouters era, he was lucky enough to have benefited from a triumphant comeback in his career and enjoy first hand the effect of his music on a new generation of aficionados.

Born in Cleveland in 1919, Benjamin Clarence Jackson took up the saxophone instead of the violin that his parents wanted him to play. He started his first band, The Harlem Hotshots, while he was still in high school, with his friend Freddie Webster. Returning to Cleveland in 1943 after a brief stint in Buffalo, Jackson caught the eye of bandleader Lucky Millinder. It was the musicians in Millinder's band that gave him the unforgettable name "Bull Moose." One night while on tour in Texas, the scheduled singer Wynonie Harris didn't show up to sing. Jackson was pulled out of the sax section to croon the song "Hurry, Hurry," and a new career was born.

Over the next five years, Jackson recorded every style of popular music. In 1947, his recording of "I Love You, Yes I Do" became the first rhythm & blues single to sell a million copies. He followed this milestone with a continuous string of hits including "I Want a Bowlegged Woman," "Nosey Joe," and perhaps his best known song, "Big Ten Inch Record," and forever left his mark on the history of R&B.

Moose toured and recorded with his band "The Buffalo Bearcats" throughout the late `40s and early `50s, and in 1961 he re-recorded "I Love You, Yes I Do." Tired of the road and the expense of traveling, the early `60s found him limiting his performing to private engagements and working for a catering firm at Washington DC's Howard University. That's where Carl Grefenstette found him in 1983.

Grefenstette's band, The Flashcats, were a popular R&B act around Pittsburgh and tri-state (PA, OH, and WV) area. They routinely played several of Bull Moose's songs in their act. "We did 'Big Ten Inch' and we'd always introduce it as a Bull Moose Jackson record," Grefenstette recalls. "A lot of the people in the audience probably thought we were making the name up." But one person didn't. In the audience one evening was Howard Kozy (aka Bumblebee Slim), a local R&B disc jockey, who not only knew who Jackson was, but where.

Grefenstette immediately contacted Moose, and coaxed him into appearing with the band. "We admired him," Grefenstette says. "He was one of the last living members of an influential era of R&B. The impact of that music on rock 'n roll can't be measured. We brought him to town because we thought it would be the thrill of a lifetime to play with him."

The resulting series of sold-out concerts with The Flashcats made Bull Moose a cult hero in Pittsburgh, and lead to his first new recordings in over 30 years. "I'm elated that I can still perform, and I'm very proud that people still remember," Moose told the Associated Press in a 1984 interview.

With Grefenstette as his manager, Bull Moose and The Flashcats recorded first a 45, "Get Off the Table Mable (The Two Dollars is for the Beer)," and then an LP, "MOOSEMANIA!" The overwhelming national response lead to appearances from New York to Hollywood. In 1985, Moose performed at New York's Carnegie Hall, and toured Europe with Johnny Otis. Jackson's re-entry into show business brought calls and letters of support from fans around the world.

Moose continued to perform regularly until 1987, when his health began to fail. He gave his last performance, a birthday concert with The Flashcats, in Pittsburgh on April 23, 1988.

The Very Best of Bull... 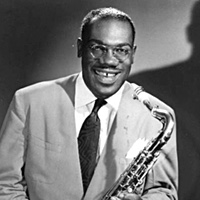 All About Jazz musician pages are maintained by musicians, publicists and trusted members like you. Interested? Tell us why you would like to improve the Julia Lee musician page.