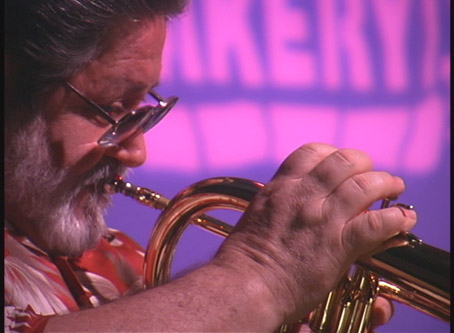 slideshow
As big bands go, the orchestra Buddy Rich founded in 1966 holds a special place in the hearts of many jazz fans. The band had a quirky hipness and energy, mostly because Rich was early to dig the youth scene, Nehru jacket and all. The band was made up mostly of young musicians, and the book included arrangements of rock, pop and soul hits like Norwegian Wood, Hello I Love You, Up Tight and The Beat Goes On. During this period, Rich's band was an orchestral wolf in peacenik's clothing, and Bobby Shew was there, in the trumpet section. [Photo by Paul Slaughter]

After re-listening to Rich's Pacific Jazz albums, I find that nearly all of the material holds up much better than I had expected. Going back to hear the band's recordings is akin to watching Panic in Needle Park or The French Connection. You feel there's a cultural transition taking place, a general unease and grittiness that bear a hidden message. And if there is indeed a subcontext to Rich's music during these years, it's that older, established jazz artists weren't entirely comfortable being told what to do by a snot-nosed generation. Yet the young rock and soul musicians couldn't be ignored or dodged. They were making too much money. The trick, by Rich's estimation, was to swing the new culture, without giving up what was important. Fortunately he had one thing in common with them: a love of the big beat.

In Part 2 of my three-part interview with Bobby Shew, the trumpeter talks about how he kept up with Buddy Rich on the bandstand, Rich's favorite TV show, Rich's temper, and the day Rich demanded that Bobby join him in his office backstage:

JazzWax: How long were you in the Buddy Rich band?
Bobby Shew: Twenty-one months. I recorded three albums with the band--Sammy Davis' Sounds of '66, Swingin' New Big Band in '66 and Big Swing Face in '67.

JW: Why was the band so popular at the height of the British rock invasion?
BS: Because of Buddy. He was like one of those rock stars. His energy, his anger and his drive. Everyone related. He also was hugely popular among the stars. All these movie actors had known him over the years and looked up to him. There were nights when you'd look out at the audience from the bandstand and the entire front rows would be made up of famous musicians and celebrities.

JW: Could Buddy read music?
BS: No. He'd always have a drummer there during rehearsals to read and play the parts initially on new arrangements. Buddy would just sit in the empty audience seats in the afternoon and listen to the band.

JW: Why?
BS: He'd only have to listen to a chart once and he'd have it memorized. We'd run through it and he'd know exactly how it went, how many measures it ran and what he'd have to do to drive it.

JW: Were there any tough moments in those charts?
BS: One song that stands out is Come Back to Me from the Sammy Davis Jr. album. Coming out at the end, there's a little drum solo. But Buddy turned it around on us. His solo was off the wall and screwed us up on when to come back in.

JW: How so?
BS: Instead of playing something recognizable, Buddy played an odd figure that left us with no clue as to when he needed us back in. Fortunately we worked it out and all turned out fine. But I learned a few valuable lessons: Never assume everything is always going to be cool. Pay absolute attention to the soloist. And not only feel the song with your foot tapping but also listen to what the drummer is playing and find the melody. Sing along with it.

JW: Did Buddy know you were singing the song to yourself?
BS: Buddy knew I could play the drums. He said he could hear that part of my background in my playing. Buddy loved to have me in the band. The greatest compliment I received from Buddy was after I left. Buddy and I used to argue and fight a lot while I was there.

JW: Why?
BS: He used to deliver these lectures to the band after a set. He'd lace into us. Sometimes they'd be well-founded but he didn't have to do it as harshly as he did. Sometimes I'd snap back.

JW: Buddy could run pretty hot.
BS: He was under a lot of pressure. The IRS was always chasing him around. The only way he'd relax was to watch TV.

JW: What was his favorite show?
BS: Combat!, with Vic Morrow [laughs]. I think he identified with the character.

JW: What's your favorite solo with the Rich band?
BS: My best-known solo is one that I didn't like, on Bill Potts' arrangement of Big Swing Face, from the album of the same name. I was on lead trumpet and had to tear into a solo. I thought there was some amateurish stuff in my solo, but so many kids were listening to it and trying to transcribe it. So I guess it was better than I thought [laughs].

JW: Rich's band was pretty popular with young teens.
BS: It was. I think they dug the rock beats and involved things we did on pop stuff of the day. It was the most fun band I've ever been on. Buddy came up with this band in the middle of the rock scene, and it was so popular, particularly on the West Coast. We sold out every place we played. When we played the Chez Club in Hollywood, they'd extend our stay for a month.

JW: Why do you think Rich had such a nasty side?
BS: I think it goes back to when he was a kid star. His parents were in vaudeville, and they were jealous of him. They didn't like that he'd get all the applause. So he had a lot of stress as a kid. And he really had a thing going with his father. One time when we were rehearsing in Vegas, his father came around.

JW: Was that bad?
BS: When his father showed up, Buddy was a different person. He became downright evil. He was spiteful, throwing chairs around and everything. Being around his father re-stimulated all that stuff from when he was growing up. Buddy always reacted to things from his past.

JW: And yet you say he also could be easy-going.
BS: Buddy was a challenge to deal with, but I knew he was a softy underneath. And he knew I knew that. He was the nicest guy when we'd watch TV together.

JW: But he was aware of his dark side, yes?
BS: Oh, sure. I remember one time he gave a horrific lecture to the band backstage. Then he turned to me and said, “You, Shew, in my office right now." His office was the dressing room. The guys in the band looked at each other, like, “Why is Buddy picking on Bobby? He didn't do anything." When we got inside, he shouted at me to close the door. When I did, he turned to me, softened up and said, “How was I?" I said, “Man, Buddy, why do you do stuff like that?" [laughs]

JW: What did he say?
BS: He said, “I like to keep them on their toes." I said, “You don't have to treat them like that." But it was fun for him. He liked when people were afraid of him. Keep in mind, he was smiling when he told me that in his dressing room. He truly believed that nice guys finish last. Underneath it all, Buddy was nervous and insecure. Whenever there's tremendous arrogance, you're looking at the superficial side of insecurity. [Pictured: Buddy Rich with Dizzy Gillespie; to see why they're laughing, click the image and read the card]

JW: Yet you had a great time on the band.
BS: Hey, absolutely. Rich's band put me on the map. Leonard Feather once did a write-up of the band while we were in L.A. When I read his review, he said that I was a “whiplash of a lead trumpet player." Now that's cool.

Tomorrow, Bobby talks about the unusual origins of the arrangements for West Side Story Medley, Channel One Suite and Machine; and how he came to leave the Buddy Rich band in 1968.

JazzWax tracks: Two of the three albums that Bobby recorded while in Buddy Rich's band are available as downloads. You'll find Swingin' New Band (1966) and Big Swing Face (1967) at iTunes or at Amazon here and here, respectively. Both were recorded live at the Chez Club in Hollywood. The Sounds of '66 with Sammy Davis Jr. and Buddy Rich is available on CD here.

JazzWax clip: Here's Bobby Shew in London on the BBC in the 1980s playing flugelhorn...