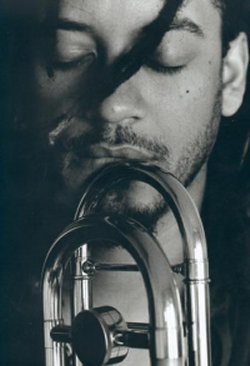 slideshow
I can probably count the times on one hand when I've walked from my apartment to a jazz club. Outside of Greenwich Village, I can think of few neighborhoods in the world that host multiple jazz spots, and consequently, the music is something you seek out rather than stumble upon. This isn't unique to jazz, of course: the economy hasn't supported a culture of live, local events since the debut of the television set. The grand old theater in my neighborhood is now a Rite Aid pharmacy (pictured is the disco ball on the ceiling). But in jazz especially, the decline of the local venue has also meant, in many ways, a decline in the quality of the art itself.

In a 2005 essay on Coltrane's live recordings, Ben Ratliff made a particularly persuasive case for this local club-robust music relationship:

There are a lot of great jazz musicians in New York, and in the world. But the number of great and economically sustainable bands has declined, along with an international audience and a circuit of clubs that encourages those bands to feel a sense of competition, and opportunities for those bands to play repeatedly for regular audiences in the same small places. A. J. Liebling once wrote that French food declined after World War I with the rise of highway driving, since small restaurants weren't committed to satisfying the same clientele night after night. Instead, they could serve the same dishes and not worry about improvement; regular waves of new diners would chew away, unaware of the stasis.

In a way, the same goes for jazz. Both bands, the Monk-Coltrane Quartet of 1957 and the Coltrane Quartet of 1965, had places in New York to take root. Monk and Coltrane played as many as 75 nights within a five-month stretch at the Five Spot Cafe in the East Village. The Coltrane Quartet played 14 weeks at the Half Note in the span of a year, from spring 1964 to spring 1965. Fourteen. It was a different time in many ways: it seems that anytime I meet someone who saw either of those bands at those clubs, they won't say that they went once, as if to cross it off a list; they went twice or three times a week, as part of their lives. (No Internet. No TiVo. Cheap rent. No risk of being thought a loser if you liked to go to jazz clubs at night.


Ratliff's piece has had a big impact on the way I think about the music and its efforts to win over a wider group of listeners. I love the idea of checking out the same band “twice or three times a week," of being in a position to (in the words of Josh Jackson) “live with music" rather than engage with it as an infrequent, expensive event.

Tonight, I'm going to give it a try. A few blocks away from my apartment, Coco 66 will be hosting the first of Search & Restore and Josh Roseman's The Loove series. The cover is cheap ($10), the musicians have top pedigrees (Roseman played trombone for Daves Douglas and Holland), and it's so close that I can stumble there. I hope I'll make it a habit.