By MIKE JURKOVIC
February 6, 2019
Sign in to view read count 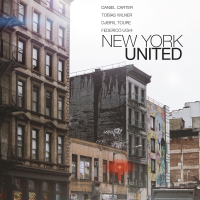 Like all folk musics exposed to migration, the rhythms shift and drone. The bottom falls out of harmonic structures and then reconstitutes from thin air. Oratorical woodwinds, strings, horns and whistles mournfully proclaim or brightly celebrate. Bringing New York folk music to light, New York United open their self-titled disc with the pulsating "Canal Street," a sonic imagining of the east-west thoroughfare severing Lower Manhattan but uniting Chinatown, Little Italy, and a host of smaller ethnic enclaves along its loud, littered route.

Driven by experimental flutist/saxophonist/trumpeter and elder Daniel Carter's long, knotty. free-jazz narratives, Blue Foundation founder and dark bloodstream pulse electronics architect/producer Tobias Wilner, Wu Tang Clan bassist Djibril Toure, and 577 Records chief, drummer Federico Ughi, the five tracks that comprise New York United are the toughest electro/ambient/trance jazz out there. Hypnotic and haunted, magnetic and obsessive, the improvised music conjured by these four places you within the wild, sprawling heart of New York. As it has infiltrated all our lives, a constant river of binary code underscores "125 Street" creating a pitched noir soundtrack as the beat and the street get more aggressive, more sinister, more Bitches Brew, circa 2019.

"Nostrand Avenue"' begins eerily as Carter's breathy sax leads into an insistent electronica which blooms almost Vangelis- like in grandeur before returning to its spooky moorings with Carter wailing high. Toure and Ughi revel in tribal relentlessness throughout both notions of Flatbush Avenue, the miniature "Flatbush Avenue" and the expansive "East Flastbush" wherein Carter's brooding, gravity-less flute thrillingly recalls Eric Dolphy. New York United is being released as a limited-edition 12'' vinyl album plus one bonus track for the digital version.