By Gareth Thompson
August 23, 2018
Sign in to view read count 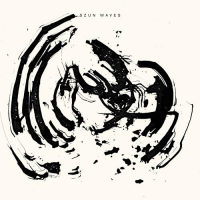 Pythagoras had this notion that the Sun, Moon and planets all emit their own unique hum. Put simply, as these orbs travel through space they produce certain sound waves. Ever wondered what that might actually sound like? Wonder no more, for this second album from vanguard jazz trio Szun Waves is surely what Pythagoras had in mind. That is, if he could have predicted the later inventions by Adolphe Sax and Robert Moog.

Introducing them briefly, we have electronica boffin Luke Abbott, saxophonist Jack Wyllie from Portico Quartet, and Australian composer/percussionist Laurence Pike. If their debut outing under the Szun Waves guise had a twilight air, this second offering is like the sun roaring down at mid-day, stared at through a magnifying glass. New Hymn To Freedom can expel the darkness from your life and induce prismatic dreams.

With its mix of free jazz and ambient textures, it recalls the music heard in '90s chillout zones, for those looking to decompress after a night of frenetic raving. Szun Waves offer a similar fuzzy afterglow, but the legacy of Sun Ra is equally fair to cite. Others to chew over in this context could be Jon Hassell, Arve Henriksen, Lonnie Liston Smith, and Quin Kirchner. Heck, whilst we're on a roll, let's also channel the vibe of Charles Lloyd circa Waves (A&M Records, 1972), Don Cherry's Brown Rice (A&M Records, 1975) and Crossings (Warner Bros., 1972) by Herbie Hancock.

Such fusions can, of course, create more flaws and downfalls than new art. But you sense an almost sacred kinship between this trio on what is, amazingly, a recording of purely live improvs. "Constellation" opens the album with shy peals of sax and synth, as if peeking out at the new day. Wyllie then finds something of Jan Garbarek's holy spirit when he recorded with The Hilliard Ensemble. Glossy ripples build over a bass boom, as Pike gets busy with all manner of tappings and tinglings.

"Fall Into The Water" uses a pensive loop to flow throughout this spacey jazz-dub number. Wyllie is known to put delay and reverb on his sax, which might be why he and Abbott often sound so intertwined. "High Szun" then takes its eastern karma for a gallop across an arid and ancient landscape. Each note seems to nourish and energise along the journey. Wyllie spirals some godly tones over aquatic keyboards on "Temple," before the astral "Moon Runes" brings a proggy glow that reminds you of Alice Coltrane's fondness for analog synths on her ashram recordings.

It seems almost absurd that such music be marked by the limits of time. But our orbit ends with the title track, where Wyllie's sustained notes float and melt like polar ice. Pike drums along cautiously, then more urgently; asking questions, enticing, prompting.

Crowned with a solar halo, this album offers one majestic aura after another. At last we mortals have a new form of Szun worship.