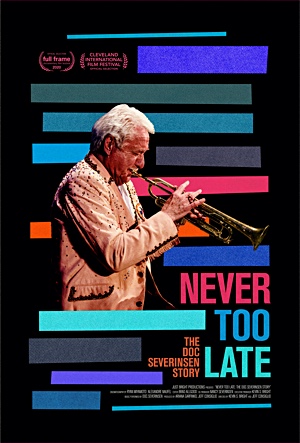 Never Too Late (Just Bright Productions, 2020) is a meticulously produced and emotion-grabbing documentary portrait of the musical career and life of trumpeter Doc Severinsen. While Duke Ellington may have said "Music is My Mistress," in the case of "Never Too Late" we discover—and superbly at that—that Severinsen's career is a "musical Mona Lisa" that is remarkably still being painted.

Every weeknight for 30 years the Tonight Show Band -comprised of the best of the best -was led by a hands-down G.O.A.T. It wailed away with both bumper and intermittent audience-directed music. The resplendent Severinsen, brighter and more fun than NBC's iconic peacock, dazzled audiences with flamboyant outfits that out-sizzled Elvis, Liberace, and Elton John. But, it was that soaring trumpeting and those dynamic performances that gave viewers probably more excitement and passion than was happening in their bedrooms. With respect to Lawrence Welk, Severinsen's All-Star band was the last of the talk show large ensembles. It was, as you will see, an integral element to the success of the show. Today's nighttime viewing offers superb smaller ensembles whose makeup and repertoire are dictated by budgets, advertisers, and audiences' changed musical tastes.

Doc's relationship with Carson—not an easy man with whom to become intimate—is a core of the film. Their symbiotic relationship and comedic ménage a trois with Carson foil Ed McMahon displayed mutual admiration, respect, and understanding. Carson, an amateur musician himself, knew too well the demands that celebrity marriages required. Scenes of Severinsen discussing Carson's passing draw tears—his and probably the film's viewers. It did mine.

No hagiography, the film details the trumpeter's multiple failed marriages, some of which were the result of the Siren calls of the road, the strain of a bi-coastal marriage, and the far from 9-to-5 jazz musician lifestyle. Yet, we see through his family's cameos and loving comments from greats such as Arturo Sandoval, Chris Botti, and Jimmy Fallon's "Tonight Show" drummer, Questlove, that the love in Doc's self-described "Italian heart" was and will always be there.

The film, brilliantly produced and edited, is shot with heavy emphasis on extreme close-ups, and with the pacing of a swinging jazz chart. It zips us through Doc's humble beginnings, his early fascination and development with the trumpet (as opposed to his father, "Big Doc's" insistence on violin), and his diving head-first into the world of the big bands, round-the-clock New York studio recordings, and, in some cases, too many cocktails. In clips of his intimate and revealing discussion with Dinah Shore—another NBC icon—he opens up. His former spouse Emily provides additional insights into the Severinsen psyche. Finally in a relationship with "someone who understands me"—celebrated trumpeter and educator, Cathy Leach—we see the pair enjoying life now in a beautiful Tennessee farmhouse.

What made and still makes Doc tick isn't really the question—it's the answer here. In the film, jazz saxophone great Ernie Watts who played with Severinsen on both the Tonight Show and Severinsen's Road Band calls Doc a "force of nature." That's certainly true, but, the film portrays Severinsen as a "force of nurture," as well. Arguably one of the most beloved and dedicated musicians ever to play a note, the Severinsen legacy resonates through his kindness, warmth, inspiration, and dedication to musicians young and not-so. It also does through this superb film.

Never Too Late is currently being released at various locations online.