By KARL ACKERMANN
December 30, 2016
Sign in to view read count 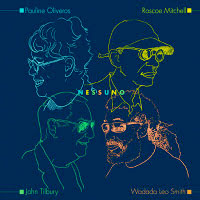 In 1991 the label I Dischi Di Angelica was founded solely for the purpose of documenting the performances of its namesake music festival in Italy. The non-profit label has grown—but only marginally—releasing a compact catalog of global music, typically related to artists that have some association with the annual event. Fortunately for fans of creative music, producer Massimo Simonini captured this unique event at AngelicA Festival in Teatro San Leonardo, Italy in 2011 and rendered here as Nessuno.

The experimentalist Pauline Oliveros (who very recently passed away) is joined by multi-reedist Roscoe Mitchell, with whom she had collaborated in the past, Wadada Leo Smith and pianist John Tilbury. Tilbury—the lesser known of this quartet—has impressed with his interpretations of modern composers such as John Cage and Morton Feldman. He is also a noted author, having written a biography of experimental composer (and his colleague), Cornelius Cardew. The unlikely group had played a three-day engagement at the festival from which these recordings were taken.

"Part I" and "Part II" each run over one-half hour and initiate with measured movements that precede the more open improvisations. Individual contributions sometimes work in tandem or break off entirely. There are moments of melody, harmony and abstraction that come together in a coherent manner. "Part II" is more juxtaposed with the upper registers of Mitchell and Tilbury setting the stage for a busy, but never jarring, interplay with the group. The shortest piece, "Part III" is the most abstract of the set but in some ways the most engaging as it brings previous elements together with a final surge of energy.

Nessuno is an unusual album on multiple levels; the group personnel is not a configuration that would readily spring to mind yet the dynamics work perfectly. The very long form of the pieces, in the hands of four diverse and virtuosic artists, makes for a challenging dialog but, again, these masters of their craft are beautifully synergized. Whether the group is working in a minimal vein or richly textured levels, the result is an unanticipated contemporary gem.