BY MARK CORROTO
December 11, 2013
Sign in to view read count 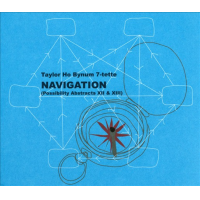 If Duke Ellington and Anthony Braxton were able to mix their DNA and reproduce themselves, the cornetist Taylor Ho Bynum would certainly be their scion. The best example of this Ellington/Braxton spawn is the latest recordings by Bynum's Sextet: the simultaneous release of an LP with digital download of the live date Navigation (Possible Abstracts X & XI) and a studio session, Navigation (Possible Abstracts XII & XIII), augmented here by drummer Chad Taylor to form a 7-tet.

TheNavigation recordings are the Sextet/7-tet's fourth and fifth recordings, and they follow Apparent Distance (Firehouse 12, 2011), the session that forged Bynum's vision for composition/improvisation centered on this recognizable ensemble of players.

Bynum's fusion of Braxton's cartographic symbols and modular compositions with Ellington's writing for specific players informs this music. It is quite unthinkable to listen to these six movements: "MANCH," "ZADE," "WUK," "TRIST," "ISH," and "KID" without imagining anything but Mary Halvorson's dysmorphic guitar sounds or Jim Hobbs' sailing alto saxophone figures. The music written in independent modules allows for shifts from one theme to the next at the signaling of a player. Each piece continues from one track to the next as one continual whole, transitions sometime not readily apparent, except for the overarching themes of each block.

Like Braxton's music the symbols and structures are explorations into new forms of composing. Bynum, a disciple of Braxton, has configured this music to swing à la Duke's concept of the blues. "MANCH" has Bill Lowe's bass trombone vocalizing lines from the 1940s while the leader's cornet imitates a carnival barker. The pieces draw extended technique and outward improvisations into long form structures without resorting to a "theme-solo-theme" structure. Binding the entire affair together is drummer Tomas Fujiwara a longtime collaborator and bassist Ken Filiano who maintain a pulse and structure to the music.

Bynum threads his musical vision through the Advancement of Creative Music (AACM) innovations by way of a traditional jazz orchestra's superstar collection of players.