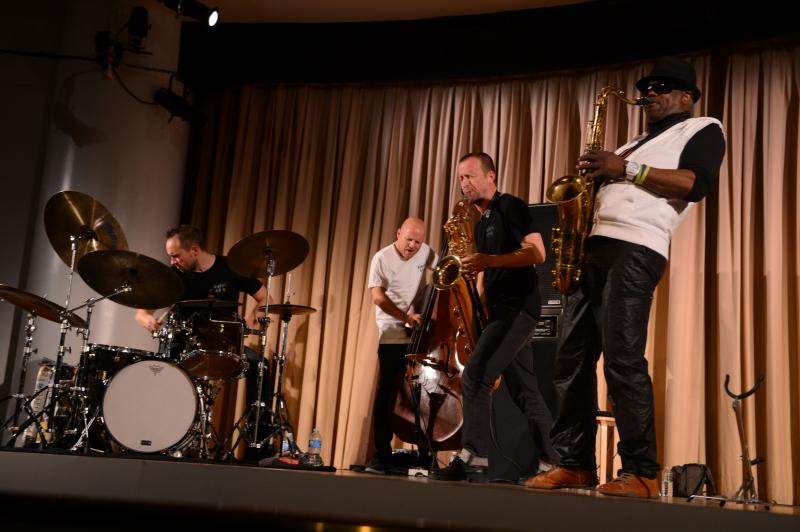 Over the course of three forms of media and four decades, Amiri Baraka stretched his way into New York's Guggenheim Museum. A poem he penned more than 40 years ago found its path into the venerable visual arts institution via the music of Joe McPhee, which in turn inspired a response from painter Christopher Wool. In a roundabout way, then, Baraka gave Wool the name for the retrospective on view through January 22.

The poem was "It's Nation Time," published in 1970 and opening with what could be seen as a call to arms: "Time to get / together / time to be on strong fast black energy space / one pulsating positive magnetism, rising / time to get up and / be / come / be / come [...] black genius rise in spirit muscle."

Those words called McPhee to action with his 1971 album Nation Time, released on CJR Records. Wool discovered that record 30 years later, when it was reissued on Atavistic's Unheard Series, curated by jazz journalist John Corbett.

To add another concentric circle, Corbett organized a night of music that served as part party, part concert, for the exhibition—a scene and a place to be seen—on November 20 in the basement theater of the Upper East Side museum (although it began with Mats Gustafsson bleating a baritone solo through the Frank Lloyd Wright designed rotunda during a pre-concert reception). The evening featured McPhee, of course, playing with the Swedish trio the Thing, as well as two people representing Wool's East Village roots. Punk poet Richard Hell opened the night and singer/guitarist Arto Lindsay—a man who perhaps more than anyone epitomizes the word "skronk"—played a solo set before McPhee and Thing took the stage.

Lindsay's performance was plagued by technical problems, although for the most part it could have passed unnoticed were it not for his between song caveats. He played the first song with a big grin and no sound coming from the amp, but frustration soon set in. "I know I'm brave but courage is not enough," he said, futzing with the cables and amp settings. Kim Gordon, sitting next to Wool in the front row, yelled encouragements, but his fatalism persevered—or was his shtick. "I'll squeeze a little pleasure out of this situation or die trying, right?" he said, leading into a dedication to his former bassist back in his no wave days. "Speaking of dying, here's one for Tim Wright."

And he played a great, despite his misgivings, or perhaps because of them, as he struggled against technology for a half hour of Brasilia skronk as harsh and brittle as anything he's done. Looking spent during each song but smiling after, he finally got the built-in tremelo on the Fender Twin Reverb working and pushed his distorted signal though it, emulating an overloaded synthesizer. Then, with guitar hyped and activated, he ventured a ballad and the familiar lyrics of "Titled" from his 1996 record Mundo Civilizado rang over the guitar clatter. He then laid into an open strum with the high E held at or about the 18th fret, working the strummed rhythm against the tremelo into a manic pulse for several minutes before introducing Thing drummer Paal Nilssen-Love for a final six minutes of intense and angular duet improvisation.

After a short break, Nilssen-Love returned with his Thingmates, Gustafsson and bassist Ingebrigt Håker Flaten—decked in black and white and sporting Rudy's BBQ shirts obtained during their South by Southwest appearance—and McPhee, in black and white and sporting a white-and-orange plastic alto saxophone. They made a striking appearance (it could not have been an accident) and more to the point played a heavy-hitting set. McPhee and Thing laid out a freewheeling montage, touching on Steve Lacy's "Call the Police," John Coltrane's "India" and Donald Ayler's "Our Prayer." They broke only to return harder, riffing seriously on Nilssen-Love's "Viking" but ramping down into a bonafide ballad, an emphatic one to be sure but still a bluesy swoon brought to sweet culmination by McPhee. They closed with Don Cherry's "Golden Heart," which the Swedes recorded in 2011 with Cherry's daughter Neneh.

Within all the intensity, they seemed to be having a good time and retained something of the party atmosphere. Flaten started on electric bass guitar but soon switched to stand-up, which he held onto the rest of the set. Along with his plastic alto, McPhee had a tenor and pocket trumpet in town; near the end of the set, Gustafsson borrowed the tenor, demonstrating that the intense scream is his own and not his baritone's. And as he, winded and tongue-tied, attempted to make announcements, McPhee put his arm around in him and said "I don't know what you're saying. You're talking Scandanoovian and I'm Poughkeepsian." It was not a night about the radical politics that inspired a poem, a song and a painting, or at least not a night wearing that time and place on its sleeve. It was more a spiritual reunion, a little fancy and uptown but with such sentiments not forgotten.