Maximize your visibility at All About Jazz by upgrading your musician page from standard to premium. With it, you'll receive All About Jazz home page exposure, a highly stylized / ad-free musician page with bonus features and benefits, an ad, plus you control where you sell your music and so much more.
Learn More
242 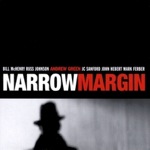 Commonly known as the author of a popular series of instruction books, including Jazz Guitar Comping, Jazz Guitar Structures and Jazz Guitar Technique, Andrew Green's lesson plans are revered for their basic approach towards complex concepts. His debut album, Narrow Margin, is a similarly understated, though deceptively intricate affair.

Temporarily sidelined by a sprained wrist in 2006, Green devoted his time to writing the multi-layered charts that make up the bulk of this session. During his convalescence, he entertained himself with a steady diet of classic film noir—a subtle influence felt in the album's eight evocative tunes—even naming this record after the 1952 film of the same name.