When Somi was growing up, her mother told her that the rain, ever unpredictable, could be as much a blessing as a challenge. The blessings might come before the rain, or they could come after—it's all in the timing, she said. That notion has stayed with the charismatic singer and songwriter all her life and now provides a metaphorical focus for her third album, If The Rains Come First. The album, which releases October 13 on ObliqSound, is a stunning collection of self-penned story-based songs, a meditation on opening ourselves up to life's blessings and challenges much in the way that we accept the rain and all that it brings.

If the Rains Come First builds upon elements that first surfaced on Somi's two previous recordings: the electric soul-jazz of 2003's Eternal Motive (SanaaHouse) and the acoustic, culture-merging elegance of 2007's multilingual Red Soil in My Eyes (World Village/Harmonia Mundi). But her further evolution becomes immediately apparent as If the Rains Come First unfolds. Singing in English and three East African languages, Somi's vocal delivery is subtle yet the power she exerts is enormous.

Optimism, conviction and resilience are hallmarks of Somi's new creations—these are songs of survival and awareness. “Changing Inspiration” speaks of surveying the present, remembering lessons of the past, and allowing both to inform and inspire the possibilities of the future. “Jewel of His Soul” was motivated by Somi's Parisian encounter with a homeless Senegalese man who had been an intellectual in his homeland before falling on harder times in his adopted country. “Kuzunguka,” which means “turning around” in Swahili, celebrates Somi's father's successful fight against cancer. “Be Careful, Be Kind” expresses Somi's emotional response to a young cousin's tragic death in a car accident and her family's coming to peace with it. “Prayer To the Saint of the Brokenhearted,” reflects on the sense of helplessness and hopelessness one often feels after heartache, while serving as a reminder of the possibilities of faith and renewal. And the title track offers assurance that we can always go home for grounding, support and love.

At the core of each of Somi's highly personal and intimate tales are shared emotions and experiences of love, life, loss and learning. “Enganjyani,” which means 'most beloved' in Rutooro, the language spoken by Somi's Ugandan mother, refers to, as she puts it, “the memory of whispered prayer and being haunted by a past lover.” The track features the legendary Hugh Masekela, a longtime Somi fan who has become a mentor, guesting on trumpet.

With If the Rains Come First, Somi's songwriting has taken on a new sophistication and depth. Surrounded by a cast of virtuosic collaborators who understand precisely where she's going and how to get there, Somi burrows deeply into her words and ultimately something transcendent emerges. Her vision was shared by the album's co-producers, ObliqSound co-founder Michele Locatelli and Backdrop/ObliqSound labelmate Michael Olatuja, both of whom also perform on the album. “Hopefully,” Somi says, “people will feel the personal nature of the stories being told and the diverse musical influences poured into the melody and instrumentation.”

A true multicultural woman, Somi was born in Illinois to immigrants from Rwanda and Uganda, then spent her early childhood in Zambia. A self-described “classical music nerd” as a child, she began studying the cello in primary school, an endeavor that continued well into her college years. Encouraged by her mother's love of song, Somi began singing herself, performing in church and eventually landing roles in her university's musical theater productions. The African cultural legacy, always crucial to her sound, is as vital as ever in her current music, which Somi likes to call New African Soul. But so too is the music she heard upon relocating to New York, with American jazz singers like Nina Simone and Sarah Vaughan as essential to her artistic development as the legendary African female voices of Miriam Makeba, Cesaria Evora and Sade.

The percussive thrust at the heart of African music is also a fundamental component of If the Rains Come First, brought to bear by an all-star African rhythm section of Ivorian percussionist Madou Koné, Senegalese guitarist Herve Samb, and Nigerian bassist Michael Olatuja. Somi recorded the album's 11 songs in Paris in order to take advantage of the city's sizable African music scene, then finished it in New York to avail herself of the world's greatest jazz community. Among the exemplary musicians who provide the coloring that fleshes out Somi's songs are longtime collaborators Toru Dodo on Fender Rhodes and piano, and guitarists Liberty Ellman, David Gilmore and Michele Locatelli.

From the album's opening track, “Hot Blue,” Somi's delicate yet pliant vocalizing is matched by the band's flair for establishing a potent groove against a sweet melody line. “Rising,” a song about faith and navigating life's challenges, is all forward motion, a flawless juxtaposition of sizzling rhythm, instantly memorable melody and a vocal style that JazzTimes magazine describes as “the earthy gutsiness of Nina Simone blended with the vocal beauty of Dianne Reeves,” All Music Guide calls “hauntingly reverent, intense and utterly captivating,” and Vogue simply calls “superb.” Somi's masterful technique also shines through on the album's closing song, “Maybe Then,” a gentle ballad touching on the not mutually exclusive desire to believe in a dwindling love while treating another as we would hope to be treated.

“Somi has an incredible subtlety and different colors in her voice,” notes Locatelli. “Her music has many different personalities, and she is an amazing songwriter with strong intuition. For this album, we wanted to bring out her intimate side, as well as her gift for melodic storytelling.”

As her career has taken off, Somi's talents have been called upon for collaborations and live performances with such greats as John Legend, Cassandra Wilson, Mos Def and Paul Simon. Most recently, internationally renowned Israeli singer-songwriter Idan Raichel featured her vocals on his latest album Within My Walls (Cumbancha), on the track “Maisha,” which Somi also co-wrote. In addition to her own works, Somi also aims to bring other important cultural gems to light, and has founded a non-profit arts organization, New Africa Live, committed to producing multidisciplinary arts events that celebrate contemporary African artists.

As active as she is, Somi always takes the time necessary to finesse each song she crafts. If the Rains Come First reveals the careful attention she pays to getting it right. “I never force a song out,” she says. “Usually having quiet space for introspection and meditation inspires me deeply. I've also begun doing more co-writing with the musicians in my band for stronger harmonic arrangements and the opportunity to share the music with them in a more personal way.”

“The songs on this album reflect where I am emotionally and spiritually today,” Somi continues. “At the end of the day, I still know who I am and where home is before, during, and after the rain—it's in the music.” Show less

Vocalist Somi to be interviewed on Reeds and Deeds II

Nouveau African Jazz-Soul Vocalist Somi to perform at B.B.King's with...

All elegance and awe...utterly captivating! —All Music Guide

Somi really took me by surprise. Here’s an African woman with the sultry sensuous voice of a great soul singer, and she’s true to her roots too. As if that weren’t enough, she gets great arrangements and musicians. She’s really a great new voice! —TOM SCHNABEL, CAFÉ LA, KCRW FM

Imagine the earthy gutsiness of Nina Simone blended with the vocal beauty of Dianne Reeves. Such is Somi. —JAZZTIMES MAGAZINE

...one of the most distinctive voices of New York’s progressive Soul Movement. —VILLAGE VOICE

East African singer Somi’s voice is full-bodied and sure. —TIME OUT NEW YORK

...this enchanting vocalist proves that we must drop the term “world music” once and for all and stop lumping African cultures and music together

All elegance and awe...utterly captivating! —All Music Guide

Somi really took me by surprise. Here’s an African woman with the sultry sensuous voice of a great soul singer, and she’s true to her roots too. As if that weren’t enough, she gets great arrangements and musicians. She’s really a great new voice! —TOM SCHNABEL, CAFÉ LA, KCRW FM

Imagine the earthy gutsiness of Nina Simone blended with the vocal beauty of Dianne Reeves. Such is Somi. —JAZZTIMES MAGAZINE

...one of the most distinctive voices of New York’s progressive Soul Movement. —VILLAGE VOICE

East African singer Somi’s voice is full-bodied and sure. —TIME OUT NEW YORK

...this enchanting vocalist proves that we must drop the term “world music” once and for all and stop lumping African cultures and music together. Blessed with a sparkling, crystalline voice and the restraint to let it sit within the music as one instrument among many, Somi’s work is delicately threaded and flows by with breezy, effortless grace. Jazzy chord structures change with the utmost patience...Expect smoldering intensity live. ROCHESTER DEMOCRAT AND CHRONICLE

...Red Soil in My Eyes...celebrates her East African heritage while staying true to soul and jazz traditions...gives voice to the post-colonial African experience in the Diaspora with an authentic blend of the contemporary and traditional. —CARIBBEAN LIFE

...the smooth, deep-voiced singer of Rwandese and Ugandan heritage moved around a lot as a kid, becoming a citizen of the world in the process. Jazz, funk, soul, gospel and African music are all rolled into what she calls ‘holistic new African soul,’ and she’s not afraid to shuffle line-ups to better explore different facets of her music...A deeply personal album, it soars on the strength of her voice and maturity, no doubt taking this singer to the next phase of her career. —GLOBAL RHYTHM

Grace, nobility, empathy, seduction, swing, global vision, cinematic sweep—these are just a few of the terms that come to mind when attempting to describe the feelings elicited by Somi and her songful, sublime debut. The bridge between jazz and Africa just took on a new elevation. —GREG TATE, MUSIC CRITIC 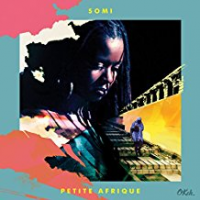 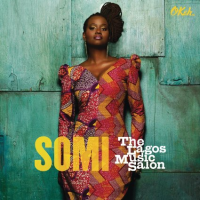 If The Rains Come...

All About Jazz musician pages are maintained by musicians, publicists and trusted members like you. Interested? Tell us why you would like to improve the Somi musician page.