The late Magic Sam was a brilliant guitarist and a soaring, urgent vocalist. Dead from heart failure at the untimely age of thirty-two in 1969, Samuel Maghett was a pivotal figure whose memorable originals, like "All of Your Love," expanded the parameters of the blues with fresh melodic lines and rich, modern-sounding chord voicings. By transcending the twelve-bar song structure, Maghett made a major break from the Fifties style of Muddy Waters, Little Walter and Jimmy Rogers. This paved the way for such soul-drenched blues stylists as Jimmy Johnson and Lonnie Brooks, as well as contemporary songsmiths like Robert Cray. (Ben Sandmel, Rolling Stone)

Born Samuel Gene Maghett, on 14 February 1937, in Grenada County, Mississippi, he received musical encouragement from his uncle, Shakey Jake, a popular blues singer on Chicago's west side. Maghett arrived in the city in 1950 and by the age of 20 had secured a recording contract with Eli Toscano's Cobra Records, an emergent independent label. He also changed his name from Good Rocking Sam to Magic Sam. Debut single, "All Your Love," a compulsive, assured performance that highlighted Sam's crisp guitar figures, set the pattern for several subsequent releases, but progress faltered upon his induction into the army in 1959. Not a natural soldier, Sam deserted after a couple of weeks' service and was subsequently caught and sentenced to six months imprisonment. He was given a dishonorable discharge on release, but the experience had undermined his confidence and immediate recordings for Chief Records lacked the purpose of their predecessors.

Sam's returned to the studio in 1966 to record several sides for the Crash Records label. His debut album for the Delmark Records label in 1967, “West Side Soul,” encapsulated an era when Maghett not only re- established his reputation in Chicago clubs, but had become an attraction on the rock circuit with appearances at the Fillmore and Winterland venues in San Francisco.

A second release for Delmark, “Black Magic,” confirmed his new-found status but its release was overshadowed by Sam's premature death from a heart attack in December 1969. Only days before, Maghett had agreed to sign with the renowned Stax Records label. His passing robbed the blues genre of a potentially influential figure. 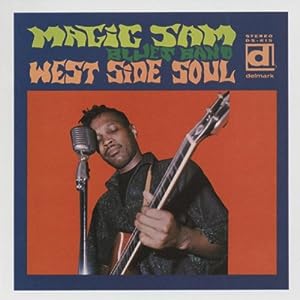 All About Jazz musician pages are maintained by musicians, publicists and trusted members like you. Interested? Tell us why you would like to improve the Magic Sam musician page.