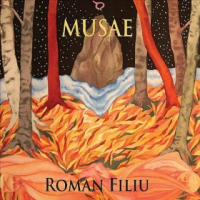 Drummer Dafnis Prieto created the Dafnison Music label as a means to control his own work and get his forward-thinking recordings into the hands of the public on his own terms. That, however, doesn't mean he isn't willing to use this imprint as a means to promote the work of other deserving artists. Musae marks the first non-Prieto release on Dafnison and turns attention toward the hard-to-define work of saxophonist Roman Filiu.

Filiu, who initially found his way into the ears of jazz listeners through his work with Irakere, vocalist Isaac Delgado, and saxophonist David Murray, doesn't really align himself, stylistically speaking, with any of his current or erstwhile employers. Filiu shares Murray's beliefs in deep-rooted explorations of the self, working in the moment, and treating each project or piece as individual statements, rather than items to accumulate in a self-defining portfolio, but that's where the similarities really end; Murray is a physical force and Filiu is more of an enigma. Filiu's soprano work tips toward the tart and pungent side on occasion, as it slices through the mix in obvious ways, but his alto always comes off as a controlled musical substance that seeps into the pores, disorienting, disarming and charming the mind at the same time.

Musae is an all-original, post-modern set of music built around deep thoughts that are occasionally long and free ranging, yet peripatetic and completely controlled. Filiu shares the frontline with guitarist Adam Rogers on half the tracks, which also feature the expansive drumming of Marcus Gilmore, and these tend to be the more absorbing performances. Filiu and Rogers both deliver probing solos that dig deep, yet never reach their destination. Resolution or climax seems to be of little interest to these two searchers; the journey is more important than the destination.

The remaining half of the program, which leaves Filiu all by his lonesome up front and features Prieto on drums, is a mixed bag. Three brief "Episodes" scattered throughout come off as unnecessary filler, but the back-to-back lineup of "El Nanga" and "La Montana" are solid gold. Prieto's drumming here awakens the sleeping giant in pianist David Virelles which, in turn, inspires Filiu toward great heights; he unfurls line after line of inspired work.

Prieto and Filiu are clearly kindred spirits who think outside the box and still believe that jazz has some undiscovered country laying in wait. Musae is the latest piece of evidence that backs up this assertion.