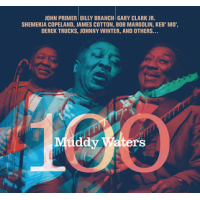 When a local guitarist and blues singer in Clarksdale, Mississippi named McKinley Morganfield made his first field recording at the Stovall plantation, on August 31, 1941, he had no idea where this music would take him. By the time he plugged his guitar into an amplifier on Chicago's Southside in 1943, he had become Muddy Waters, a man whose unique voice and sound would influence American popular music in the second half on the 20th century. Muddy Waters 100 is the centennial celebration of his birthday (April 4, 1915) and also a commemoration of this immense legacy.

This production is a compilation covering the broad spectrum of the Waters catalog from country blues to the pioneering Chess studio sessions in Chicago. With an all-star lineup of blues specialists and veterans under the direction of vocalist/guitarist, longtime Waters alumnus, and close friend John Primer, the mood is set with the trademark "Got My Mojo Working," featuring vocalist Shemekia Copeland trading verses with Primer.

The other prominent guitarist throughout the record is Bob Margolin, who also spent many years in the Waters band. Johnny Winter (who produced four Muddy Waters albums in the 1970's) was brought in as guest slide guitarist on "I'm Ready," and harmonica wizard James Cotton livens up "Good News," and "I Feel So Good," adding an authentic touch, as he played on the original recordings in the late 1950's. Representing the younger generation of bluesmen are Billy Branch, who sits in on harmonica on several tracks, and guitarists Gary Clark Jr., Keb Mo,' and Derek Trucks, who were requested to add a contemporary flavor to the celebrated repertoire.

Though the electric Muddy Waters is acknowledged and has been thoroughly documented, his folk/country recordings from 1942 have yielded some interesting songs. "Rosalie," going back to the Son Sims Four, is a case in point, and is masterfully covered here with Steve Gibbons handling the fiddle part. Also from the same period is the only known Waters gospel song "Why Don't You Live So God can Use You," presenting vocalist Leanne Faine, who does a fine job raising the roof. "I Be's Troubled," from the 1941 Alan Lomax field recordings, is another gem and on this version Margolin plays a stinging slide guitar as a fitting compliment to his mentor.

They wind up this fine homage with "Feel Like Going Home," which was the flip side to the first hit on the Aristocrat label from 1948, "I Can't Be Satisfied." By 1951 Waters had assembled his first legendary band with pianist Otis Spann, Little Walter on harmonica, and Jimmy Rogers on guitar. This would be the ensemble that would define the Muddy Waters sound, and set the standard for electric blues henceforth.

John Primer does a remarkable job not only on guitar, but his vocals are spot on. There is probably no one on the planet that can cover Muddy Waters better than Primer, he obviously knew he had a daunting task taking on this project, and took his performance to another level. Hailing from Mississippi as well, Primer has more than paid his dues, playing with Willie Dixon, Magic Slim, and releasing fifteen albums as leader. But he will be forever recognized for his tenure in the Muddy Waters band, a position he held until Waters died in 1983. With Muddy Waters 100, Primer can rest assured that the music lives on and the spirit of his best friend rests in peace.

Got My Mojo Working; Still A Fool; I Be’s Troubled; I’m Ready; Mannish Boy; Rosalie; Why Don’t You Live So God Can Use You; Good News; Trouble No More; She Moves Me; Can’t Get No Grindin’; 40 Days And 40 Nights; Last Time I Fool Around With You; I Feel So Good; Feel Like Going Home.