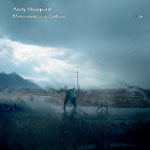 Familiar to ECM fans for his work with Carla Bley including the small group The Lost Chords Find Paolo Fresu (WATT, 2007) and large ensemble Appearing Nightly (WATT, 2008), Andy Sheppard has also proven comfortable in ultra ultra large ensembles like the 200 saxophone strong Saxophone Massive that he led at Mai Jazz 2008 in Stavanger, Norway. Earlier work with Bley—and his sublime duet disc with guitarist John Parricelli, P.S. (Provocateur, 2003)—demonstrated the British saxophonist's ability to fit seamlessly within a larger context and perform as featured soloist and egalitarian equal. None of these past works, however, were sufficient preparation for the buoyantly optimistic and relentlessly lyrical Movements in Colour.

Sheppard has assembled an unusual quintet for his ECM debut as a leader. Parricelli, with whom Sheppard works regularly, is a strong foil for the saxophonist's unmistakable elegance, as he winds his way through Sheppard's cross-cultural compositional blend of folkloric elements from India, Latin America, and Africa. Norwegian guitarist Eivind Aarset is also on hand, providing his characteristically un-guitaristic textures, albeit sometimes so buried in the mix as to be felt more than heard. Fellow Norwegian Arild Andersen has been a mainstay of the label since its inception, a member of the first wave of Norwegian musicians brought to international attention by the label in the early '70s. Virtuosic and muscular, yet equally capable of the deep melodism required by Sheppard's writing, the bassist is a perfect combination of rhythmic anchor and solo voice, rivaled only by Swedish bassist Anders Jormin in his ability to make his instrument truly sing. Tablaist Kuljit Bhamra may be the new face here, though he's worked with Sheppard before, and so with an augmented percussion set-up including cymbals, snare drum and more, he adds a deeper ethnic flavor to the music, providing greater distinction to Sheppard's seven original compositions.

When Sheppard plays soprano saxophone, as he does on the rhythmically propulsive and harmonically ambiguous but gradually coalescing "Nave Nave Moe," there's some resemblance to Oregon, albeit with Parricelli's voicings more direct than those of Oregon co-founder/guitarist Ralph Towner. With both Andersen and, in particular, Aarset creating warm cushions of processed sound, the group takes "Bing," beginning in linear Indian fashion based around a simple pedal tone, ultimately morphing it into a more Western-centric series of changes. "Ballarina," on the other hand, is a dark ballad, one of the few to feature Aarset at the forefront, easily identifiable as he is in the left channel, with Parricelli on the right.

Sheppard's approach here is one of unostentatious, spare thematizing. There's precious little hard- blowing, though spontaneous interaction is clearly the order of the day. One of ECM's most eminently accessible records, Movements in Colour demonstrates the beauty of simplicity, the appeal of modesty. It's deceptively difficult to create music that speaks on a broad, elemental level, and with Movements in Colour Sheppard has succeeded in creating an album of unassuming richness in texture, color and melodic depth.