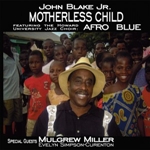 The precursor to the blues as a music form was first heard in the chants and songs of African American slaves. Their lyrics of hardship, perseverance, and faith were expressed through work songs, hymns, and spirituals, some of which are beautifully interpreted on John Blake Jr.'s Motherless Child.

Growing up in South Philadelphia, Blake had this influence placed within him at an early age through his exposure to church services. His mother played piano and organ, and together with the stirring sounds of singers, the sacred music forged lasting impressions. Its germination shaped his musical path, one that led the classically trained artist, world-class violinist, and educator in performances with pianist McCoy Tyner, the Duke Ellington Orchestra, the Turtle Island Quartet, and a number of recordings as a leader. It also led to Blake's involvement in local community projects and global humanitarian efforts. This release lifts the spirit and swings anew via Blake's longtime working quartet (his son, drummer Johnathan Blake, bassist Boris Koslov, and pianist Sumi Tonooka) and special guests that include the sublime Howard University jazz vocal ensemble, Afro Blue.

Blake's empathetic yet progressive arrangements of sacred music fits well with Afro Blue's stylish and pristine voices. They move in harmony on the updated version of the title track, Blake's violin singing soulfully and guest Manteca delivering a virtuoso performance. "Go Down Moses" is heavenly; at one point, after the choir sings the verse, Blake's masterful bow lifts the time-weathered piece with a sonorous solo before the choir re-enters with some Ella Fitzgerald-style scatting and trading with Johnathan Blake's ardent traps.

The music's spirituality is undeniable but is never overwhelming. Blake's haunting intro to "A City Called Heaven" has the same impact that is present in John Coltrane's "A Love Supreme" with its sense of reawakening. Other pieces are also touching, such as "A Balm In Gilead" with vocals and arrangement by Evelyn Simpson-Curenton and "I Want Jesus To Walk With Me" where Afro Blue provides some classy vocalizations reminiscent of Take Six. The music and songs in Motherless Child effectively honors the past and embraces the challenges of the present with optimism.

Motherless Child; Go Down Moses; A City Heaven (Violin Solo Intro); A City Heaven; A Balm In Gilead; Steal Away; Hold On; I Want Jesus To Walk With Me; Nobody Knows.