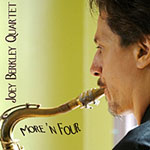 A single listen to the pop/jazz standard "Nature Boy" is proof that saxophonist Joey Berkley's tenor is as robust and accomplished as they come. Living in New York since the late 1970s, the Canadian expat has survived and thrived in the "City That Never Sleeps"—performing with top musicians, running his own music company and teaching, while maintaining a couple of bands including the nine-piece jazz/funk Band, Funkasaurus Rex.

More 'n Four is a straight-ahead release—a continuation and extension of his debut quartet release, Made in NYC (A-Records, 1999)—that is steeped in the sounds of saxophone greats Dexter Gordon, John Coltrane and Michael Brecker, as well as younger players including Wayne Escoffery and Jerome Sabbagh. The purpose and passion is heard through Berkley's continuing artistic expression, one that balances a powerful tone with glowing lyricism.

The band shines again on another tune sung by Cole, the classic "The More I See You." The dexterity and emotion of Berkeley's solo sends shivers up and down the spine. While his soprano's tonality is not as impressive, he still has the juice on "The Alamo," but it's tunes such as "Don't Look Down" that prove his abilities as a player, writer and arranger of multiple voices and intricate rhythmic changes.

The icing on this cake is applied liberally on "Is There No Escape," where Tony Jefferson's drumming and searing tenor obliterate the heady bop tune. Berkeley is serious. Let's have more of More 'n Four.

Nature Boy; Push; Naked Flight; Unsung; The More I See You; The Alamo; Don't Look Down; A Peace Missing; Is There No Escape?