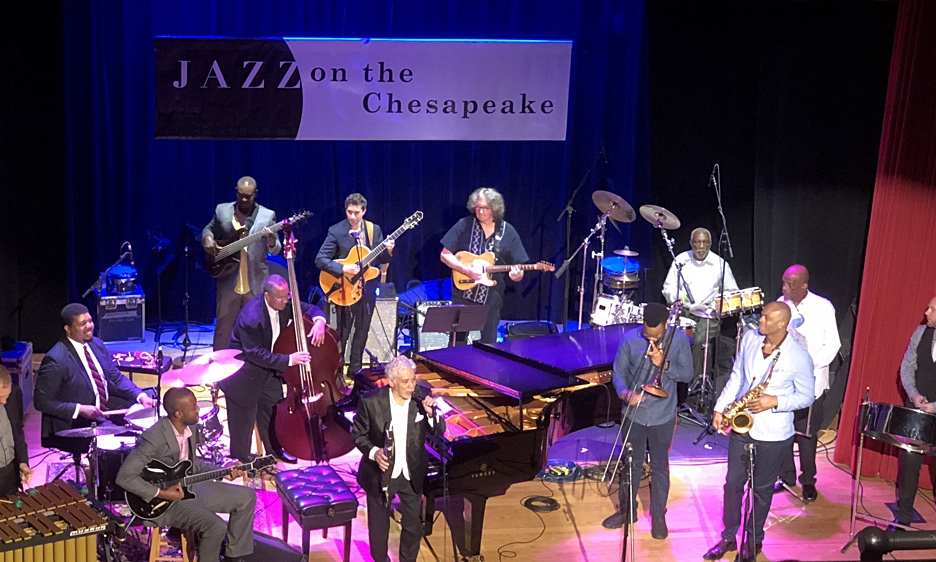 "Ten years," Monty Alexander wryly observed at the center-stage microphone with a disbelieving shake of the head. "Ten years of this festival, and 75 years as me." It was a celebration of multiple anniversaries at the weekend-long Labor Day jazz celebration that bears his name. The Jamaican pianist was in fine spirits talking about his most recent birthday milestone—more so than usual, that is, for someone famous for making every performance an uplifting experience already. On top of that, he noted that the year marks a silver wedding anniversary for him and Caterina Zapponi, who shortly stepped in for a couple slinky verses of "I've Got You Under My Skin." It was the capper to a splendid first set mixing stride, swing, Caribbean tunes and more, only to be topped with even more colorful madness after the break.

Communion and friendship of course were the central themes of the occasion. The Avalon Theater and its surrounding town of Easton live up to all the quaint cozy promise they offer at first glance. Such an inviting environment couldn't be a better fit for the festival, which also offered a 100th-birthday tribute to Nat King Cole and a Sunday gospel brunch (among other things) around this headlining performance. Those who couldn't stay the whole weekend still got to see a wonderfully motley gang of players from the other shows dropping in on the exuberant three-hour set Saturday night.

Alexander, long-serving bassist J.J. Shakur and an always-smiling Jason Brown made a core trio for most of the night as the continual procession of other friends came and went. The pianist's own piece "Hello," full of sunshine and Creole boogie, had the packed rows of seats swaying and bouncing almost as soon as the things kicked off. Another early highlight came with an uplifting read of "We've Only Just Begun," which he laughingly explained is "just how I feel myself." Alexander's role as raconteur is as important to any show as his bright piano work: a traditional island song found him meandering around the stage with a straw hat and tambourine, warmheartedly sharing stories about his home of Kingston, Jamaica. Smoothly enough that it didn't feel like a transition, it soon gave way to a jaunty "You Are My Sunshine" that ended with Brown clattering hard enough to bring the room down.

"In the Wee Small Hours" went from merely dreamy to outright rapturous, largely courtesy of Chuck Redd stepping in behind the vibraphone. Randy Napoleon brought out his guitar for a fleet run through "Body and Soul," while Dan Wilson's turn had him trading six-string licks back and forth with the leader's piano like two athletes batting a volleyball. Soon enough it was back to the islands for a stretch of the second half that featured some dazzling steel-drum virtuosity from Othello Molineaux and Victor Provost.

Not to ignore the more traditional jazzy side of things, the set soon got a rich dose of brass from Wayne Escoffery and Andrae Murchison as well. Alexander couldn't have been more full of praise for the other players and effusive at how happy he was to play with them all. "After ten years, I want to do something special—not just for the audience, but for me, " he laughed during another amiable between-song chat. "People say, you're being a little selfish? I say yeah, that's right!"

Selfish or not, the expanded cast let him take advantage of the amorphous globe-spanning format he calls the Harlem-Kingston Express, which was a simply magnificent treat for everyone. Alexander was able to skip from reggae to bebop and back at the speed of a gesture from the piano bench. Mostly it became a vibrant and colorful mix of the two, especially when they dug into a couple Thelonious Monk arrangements as featured on the just-released Wareika Hill— Rasta-Monk Vibrations (MACD, 2019). "Well You Needn't" brought out the reggae core the song apparently had all its life—who knew?—and the horn players wove through "Misterioso" to bring out all the sly shades of the title in high classy-funky style.

The whole thing built to a house-shaking finale, vamping around Monk and Harry Belafonte until all fifteen of the evening's players were onstage and happily wailing their hearts out. It made a perfect end to a night all about togetherness and joy. It may not happen often enough, but such communion is just what music (and really life) is all about.