Othello Molineaux, was born in Trinidad and Tobago, and as his resume states, is “as old as a tree”! He was educated at Fatima College and Queen’s Royal College in Port of Spain, Trinidad and Tobago. Othello’s musical career was initiated at an early age with piano lessons from his mother. Growing up in a musical family, his father a violinist, brother a jazz pianist, and sister a vocalist, his love for jazz and his love and respect for the Steel Drum or “Steel Pan” as it is called in its native Trinidad and Tobago, led to the formation in his mid teens of his own group, of which he was both tuner and arranger. Leaving Trinidad in 1967 for the Virgin Islands, Othello was contracted as a pianist at the V.I. Hilton where, consumed by national pride, he was soon at the forefront of, and very instrumental in the successful campaign of getting the Steel Drum Program into the School System. A program that is vibrantly alive and well today.

Moving to Miami in 1971, he continued his campaign for the steel drum to be universally recognized and accepted, conducting countless percussion forums at the University of Miami, master classes throughout the High Schools, playing at local jazz clubs, touring the world, and recording the sound of this incredible instrument, while always believing that “the correlation of this innovation with the existing concept of the art of music and a scientific explanation of the instrument and its operational features was a necessary pre-requisite to the universal recognition and acceptance of Trinidad and Tobago’s musical invention and gift to the world. The advent of the instrument marks a near revolutionary era in the history of music and musical instruments.” The steel drum was invented in Trinidad and Tobago and is the national musical instrument.

Othello’s use of the steel drum in the jazz medium across a wide range of musical styles attests to his passion for the instrument and its possibilities and his own very dynamic musical concept. As he asserts “The steel drum is a very chromatic instrument. All the notes are there. It was imperative to play jazz on the instrument, so as to have the ‘student of the art’ realize its harmonic possibilities!! Because there is no chromaticism, because there is no logical coherence to the musical staff, the intellectual musical mind could only think of it as percussive and could not relate to the instrument being as challenging as it is. Now, they know.” Othello’s last album “It’s About Time” that was in 1993 voted best Jazz Album by the Miami New Times was also declared a “Jazz Masterpiece” by America’s #1 Jazz Magazine, “Jazz Times”!! His groundbreaking album with Jamaican, Monty Alexander “Ivory and Steel” in 1979 has been documented as the “first successful commercial jazz album using a steel drum”. His instructional book “Beginning Steel Drum” that was published by Warner Bros., is being used by scholars worldwide and is also being translated to Japanese!

Other musical honors include the 1991 Black Music Month’s Vanguard Award; inclusion in the Japanese Jazz Encyclopedia; nomination in 1979 and 1981 for Best Band in the Jazz Rock category of the Carbonell Music Awards; 10th Place in the International Music Poll – Miscellaneous Instrument category. He has also performed with Herbie Hancock, Jaco Pastorius, Hubert Laws, Dizzy Gillespie, Pete Minger, Toots Thielmans, Monty Alexander, Art Blakey, Ira Sullivan, Peter Erskine, Ahmad Jamal, McCoy Tyner, Randy Brecker, Bob Moses, Joe Zawinul, Bob Mintzer, Jack Dejohnette, Howard Johnson, Peter Gordon and J.J. Johnson. International appearances have included jazz festival in many cities and countries across the globe – Athens, Greece; Berlin, Germany; Vienna, Austria; The Hague, Holland; Toronto and Montreal, Canada; Milan and Rome, Italy; Lugano and Montreaux, Switzerland; Stockholm, Sweden; Pori, Finland; Copenhagen, Denmark and Japan. He also performed on Japanese National TV; CBS This Morning; The Mike Douglas Show; and the Cable Satellite Network. And, he appeared on the soundtrack for the “World of Difference” television show in Miami, Florida. A few of the venues that he has performed at around the world have been at Radio City Music Hall, Avery Fisher Hall, Greek Amphi Theatre, Left Bank Jazz, Royal Oak Theatre, The Savoy, Paramount Theatre, Tulane University, and the Academy of Music – Philadelphia. In 1982, Othello's 10th place rating in the miscellaneous instrument category of the "International Jazz Critics Poll" certainly recognized and legitimized the Steel Drum as a pertinent Jazz Instrument! This recognition, along with the numerous accolades that he has accumulated along the way, did ultimately earn him an induction in 2009, into the South Florida Jazz Hall Of Fame!

With such a long and remarkable career, Othello summarizes his involvement as follows “I plan to continue my path of creatively exploring the instrument of my culture and my heart within my personal music context. I wish to make my contribution to the recognition and acceptance that this unique innovation deserves.”.. 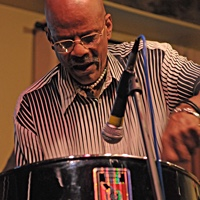 All About Jazz musician pages are maintained by musicians, publicists and trusted members like you. Interested? Tell us why you would like to improve the Othello Molineaux musician page.