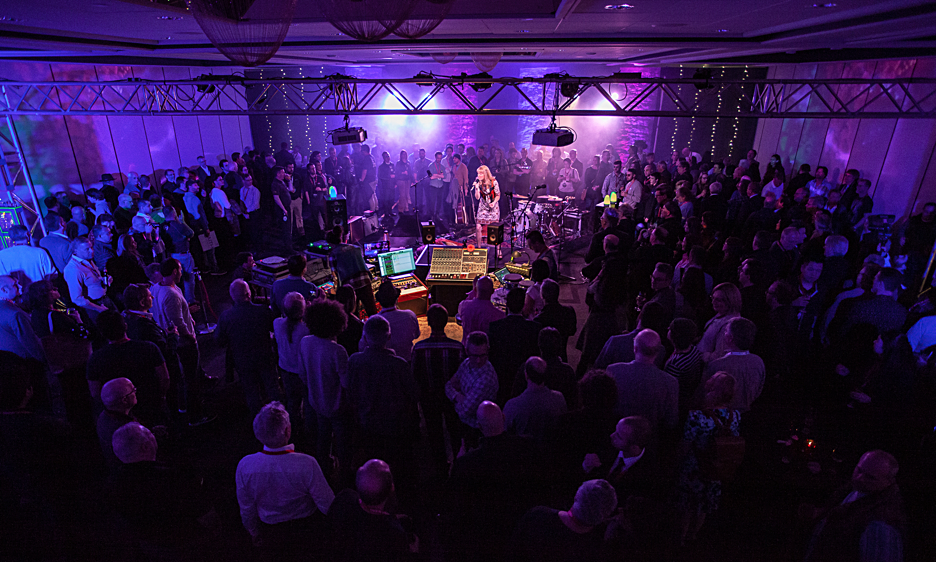 By John Kelman
April 9, 2019
Sign in to view read count
When All About Jazz was invited to cover the 32nd annual Montréal Audio Fest, a spectacular event spotlighting over 300 manufacturers and distributors of high-end audio/video systems ranging from $1,000 to $1,000,000, we jumped at the opportunity. In this wrap up article, we include the seven video interviews, produced in collaboration with Sur Place Media, featuring representatives from the festival and several Canadian manufacturers. We also "dropped the needle," listening to some favorite recordings on their equipment. Finally, for a little extra fun, we've thrown in a bonus unboxing video, taking a look at Grado's Prestige Series SR325e headphones.

In Episode 1, I interview festival co-director Michel Plante about the history of the event and this year's theme: Woodstock @ 50.

Emm Labs' owner and chief designer is the renowned Ed Meitner, who has literally spent a lifetime in the audio industry. He was a part of the development team for the Direct Stream Digital (DSD) technology at the core of high resolution SACDs that continue to be released to this day. Partnered with his son Amadeus, Emm Labs has continued to expand its product line to including a range of CD/SACD players, amplification, digital-to-analogue conversion and more, with products utilized by prestigious names including Abbey Road Studios, Bernie Grundman Mastering, Bob Ludwig, Mobile Fidelity and Chesky Records, and artists like Chick Corea, Pink Floyd's David Gilmour, Diana Krall and Andrea Bocelli.

Together, Tetra and Emm Labs have partnered to create a true dream system worth $385,000. Based on sampling it at the festival, it's worth every penny.

In Episode 3, I interview Christian Ouellet, President of St Hubert-based company, Solen. Amongst other internal components, Solen manufactures "the highest performance loudspeaker crossover parts available" and "the highest quality speaker driver units that you can find," used by a plethora of well-known speaker manufacturers including Totem, Yamaha, Paradigm and others, in systems across the pricing spectrum.

Christian explains, amongst other things, the difference between various tweeters and why most quality speaker companies have moved to cabinetry with no parallel lines.

The listening session employs Solen's top-of-the-line "The Ultimate Experience" four-way speakers, driven by electronics from Bryston, who will be interviewed later in the week and whose many products are distributed by Solen.

In Episode 4, I interview Oracle's Jacques Riendeau and EON Art's Stéphane Hautcoeur, who have teamed together to create another dream system that, unlike many at the festival, still relies on physical media. Oracle designs and manufactures both more easily affordable and studio reference quality turntables and CD players, amongst other products, with a very specific and recognizable design aesthetic that can best be compared to the "box-in-a-box" design being used in many modern acoustic performance spaces. EON Arts specializes in tube/transistor combo amplifiers and other components, utilizing tubes in the preamp stage and transistors in the power amp stage. Together, while far from entry level, Oracle and EON Art provide systems that span a broad price range and will appeal to audiophiles still disposed towards hard media.

In Episode 5, I interview Costa Koulisakis, Vice President Customer Experience at SimAudio, who manufacture a full range of audiophile quality electronic audio gear in its MOON by SimAudio line, starting with an entry level "All in One" system priced at $4,000 (CAD) and going up from there. Moon by SimAudio's "All in One" system requires only a set of speakers, enabling those who already have a good pair of speakers but lesser electronics to upgrade their sonics at a very reasonable price for the performance.

In Episode 6, I interview James Tanner, Vice President of Sales & Marketing at Bryston, who has been designing and manufacturing state of the art specialty electronics to both the consumer and professional audio marketplaces for over 35 years. In the consumer market, Bryston manufactures state of the art audio electronics, including active speaker systems, amplifiers, crossovers, CD players and more, all intended to provide their customers with the most musically accurate and reliable performance available. In the professional market, Bryston offers amplifiers for recording studios, radio and television broadcast facilities, and sound reinforcement applications such as stadiums, arenas and other large-scale venues. James illuminates the company's history (surprising, considering where it began) and discusses the benefits of stacked and active speaker configurations.

In Episode 7, I pay a visit to the Audiofilles room. Yes, a play on the word Audiophile, Audiofilles ("Audio Girls") is an initiative begun by the Montréal Audio Fest in 2018. Its purpose: to bring attention to women in a largely male-dominated market. A team of ten women (including interviewees Karine Rose and Amelie Therrien), whose musical interests run far and wide, are presented with a number of products from a variety of manufacturers, and put together a different system each year. What makes its room so different is, instead of the showroom environments favored by most manufacturers/distributors, Audiofilles create a living room environment with couches, carpets, plants, wall hangings and more, to create a more informal, comfortable setting to sample their system...and their music.

An important success for the 2019 Montréal Audio Fest? Attendance was up over 20% from 2018, with over 6,000 people registering for the event (registration is free). The demographics are also important: 20% of registrants were women, and only 30% were above the age of 55. This means that the festival is succeeding, not just at bringing more people to its event, but more women and a younger, 25-55 age group.

In this bonus episode, I unbox and sample a set of Grado Prestige Series SR325e headphones, provided by Montréal's Audioville shop, who had a kiosk at the festival. Neutrality but with warm harmonics, rich vocals, broad dynamics and a smooth top end, is the name of the game here, and these open air headphones are at the top of the company's Prestige Series line. Frequency Response? An impressive 18Hz -24KHz. With "a new driver and cable design. The added mass from the metal housing minimizes transient distortions. With the new 8 conductor cable design you will notice superb control and stability of the upper and lower range of the frequency spectrum, with both supporting Grado's world renowned midrange. The SR325e will produce a sound that is pure Grado."