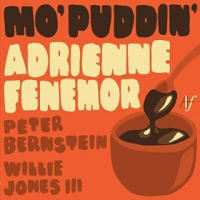 Vocalist, Hammond B 3 specialist and educator, Adrienne Fenemor unveils a tasteful musical treat with the dynamic Mo' Puddin' presenting an explosive session of organ-based music offering a selection of six originals and three standards full of swing and swagger. A New York-based performer and educator since moving to the USA in 2008, Fenemor was born and raised in New Zealand and hailed from a musical family. With no jazz organ players in the country, in 2003 she imported a Hammond B 3 organ and taught herself how to play it. Inspired by the great Jimmy Smith, Richard "Groove" Holmes, Jack McDuff and Joey DeFrancesco, she studied and copied their styles.

Having performed professionally prior to her move to the states, Fenemor has several other recordings she made for the Asian market and one in New Zealand. Those previous albums featured Fenemor on the vocals and piano while this date, is her very first instrumental album performing on the organ only. For this recording the leader chose to use a trio format with Willie Jones III on the drums and the great Peter Bernstein rounding out the rhythms on the guitar.

The title track and first original, kicks off the program with the inevitable call-and-response between her and the guitarist establishing the template for the date. After the swinging "Minor Mixup," which features both Bernstein and Fenemor on a quick-paced, powerful performances, the infectious bluesy standard from Jimmy Smith, "Back at the Chicken Shack" takes on a whole new life with a propulsive rendition by the trio.

Fenemor show us a bit of her soft side on the beautiful original ballad "Lovers Embrace" performed slow and gentle with Bernstein also weighing in with delicate guitar work as the leader takes and keeps center stage on this track. The organist's affinity for the music of Smith is confirmed here with another version of the legend's classic "The Boss," in able hands here as the lady kicks back and delivers a burner.

The music finalizes on two amazing performances first, on the high-energy original "Caribbean Day Dream" then percolates and finally explodes on the oft-recorded Bobby Timmons finale tune "Moanin,'" where Fenemor is at her best sounding much like Joey DeFrancesco on a steamy solo performance. Adrienne Fenemor is a surprisingly gifted musician with one very sweet sugar-high treat on Mo' Puddin', offering delicious swinging organ-based grooves sure to resonate with aficionados and audiences everywhere.