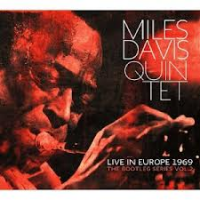 While the quintet heard on this first-time commercial issue of four live dates from 1969 was, in fact, already uncovered on the November 4, 1969 Copenhagen concert DVD included in the Bitches Brew: 40th Anniversary Collector's Edition and Legacy Edition (both Columbia/Legacy, 2010) and a portion of Bitches Brew Live (Columbia/Legacy, 2011)—as well as in sextet form (with the addition of percussionist Airto Moreira) on Live at The Fillmore East, March 7, 1970: It's About That Time (Columbia/Legacy, 2001)—the performances documented on Live in Europe 1969: The Bootleg Series Vol. 2 demonstrate, perhaps, more than any previous live recordings, just how rapidly Miles Davis was evolving in the key years from 1968-1970, morphing from the outer-reaches of acoustic free/post bop with his much-heralded mid-'60s quintet to the denser, funk- driven music that would occupy him from the early-to-mid-'70s, until the trumpeter's self- enforced retirement in 1975.

Recorded as little as two weeks before and as much as four months after Bitches Brew Live's July 5, 1969 Newport Jazz Festival date, some within days of the 1969 Copenhagen DVD, and between four and eight months prior to the Live at The Fillmore East show, much of this music—three CDs, plus one DVD with a 45- minute, full-color performance of the quintet in Berlin on November 7, 1969—has been circulating in bootleg versions for years, but rarely in such sonically (and, in the case of the DVD, visually) cleaned-up form. The Bootleg Series Vol. 2 captures this quintet at two significant junctures: first, in July, 1969, a few weeks before entering the studio (albeit with a much larger cast) to record Davis' seminal Bitches Brew (Columbia, 1970); and second, in November, 1969, less than two weeks before once again returning to the studio to continue recording music that was ultimately collected on The Complete Bitches Brew Sessions (Columbia/Legacy, 1998).

What distinguishes this collection of just under four hours of exhilarating performances from a group that was still getting its feet wet with the Bitches Brew repertoire—performing four of its six tunes here (in some cases, more than once and, in the case of the Antibes performances of July 25-26, 1969, prior to its recording in the studio)—is the breadth of repertoire. Never again would a Miles Davis group regularly perform music from his first "great" quintet with saxophonist John Coltrane, specifically pianist Thelonious Monk's iconic "`Round Midnight," from the trumpeter's 1956 Columbia Records debut, Round About Midnight. Nor would material be heard from the transitional years between regular quintets, like "No Blues," first heard on his two live In Person at the Blackhawk (Columbia, 1961) sets with saxophonist Hank Mobley, or the lovely balladic standard "I Fall in Love Too Easily," which debuted on Seven Steps to Heaven (Columbia, 1963), the album where pieces of his second "great" quintet began to appear and coalesce.

With more relatively recent fare from the second quintet—"Footprints," from Miles Smiles (Columbia, 1966), "Masqualero," from Sorcerer (Columbia, 1967) and the title track to Nefertiti (Columbia, 1967)—soon dropping off set lists, this box also represents the first (and, probably, last) time material from Davis' gradual move towards electric music on Miles in the Sky (Columbia, 1968) would be heard in concert ("Paraphernalia").

Davis was, indeed, already moving towards more electric environs by this time. In a Silent Way (Columbia, 1969) had already been out for a few months, though the only composition that would make it regularly into set lists was "It's About That Time," which appears here, both in the July 25 Antibes performance and on the DVD in Berlin. Still, these two versions are so radically different, and retain only the barest sketch of the original's defining melody, that they might just as well be new compositions.

The same can be said for much of the music here; "'Round Midnight" is near- unrecognizable, with pianist Chick Corea's free-flowing Fender Rhodes lines creating a more ambiguous undercurrent to Davis' considerably extemporized look at the familiar melody. Only the sharp punctuations that dramatically introduced the solo section of the original are retained (and met with tremendous applause), but here acting more as rallying point for the group, as Dave Holland introduces a rapid walking (more like running) bass line that is bolstered by drummer Jack DeJohnette's marriage of empathic support, uncanny response and his own approach to swing and tone that, even at this early stage in his career, distanced him entirely from Davis' former drummer, Tony Williams, and began to assert his own unmistakable personality.

This group was the first to introduce electric instruments to Davis' music in a live context—only one actually: Corea's Rhodes, which he employs almost exclusively throughout the four discs. Still, this is a far cry from the more rock-inflected music that was soon to come; if anything, the music on Live in Europe 1969 is some of the flat-out freest improvisational music released by the Davis estate to date. Of course, the second quintet—where saxophonist Wayne Shorter (here, that group's only remnant) was joined by pianist Herbie Hancock, bassist Ron Carter and Williams—regularly stretched the boundaries of its compositions, heard with crystal clarity on Live in Europe 1967: The Bootleg Series Vol. 1 (Columbia/Legacy, 2011); but this new quintet of Davis, Shorter, Corea, Holland and DeJohnette took the music to even more far-flung places—a function, most likely, of DeJohnette's formative years in Chicago and Holland's work in England, before Davis called upon him to relocated to the United States.

If this is still largely an acoustic group, the unmistakable signs of Davis' growing enthusiasm over rock and funk music can be easily heard on tracks like "Miles Runs the Voodoo Down," which centers on Holland's groove-driven riff but still opens up for passages of greater freedom, especially with the largely unfettered DeJohnette in the engine room. Elsewhere, Davis' interest in the more floating, ethereal side of the equation can be heard on two versions of Shorter's "Sanctuary" which, segueing into brief versions of Davis' regular set-closer "The Theme," end both the July 25 and 26 Antibes sets, two shows that, with the exception of those two tunes, keyboardist Joe Zawinul's "Directions" and Davis' "Miles Runs the Voodoo Down," are entirely different in construction and approach, as the trumpeter cues his group, during these continuous sets, with often the subtlest of gestures.

There's also a tune that's never been heard before: "This," which ends the Stockholm show of November 5, 1969 on a powerful note: Davis' knotty theme linked together by the ascending Corea and Holland, with the trumpeter's thrilling solo dissolving into a feature for DeJohnette, who plays with near-complete abandon before Corea joins him for a brief but ethereal coda.

Throughout, everyone is at the top of their game, with Davis at what may well be the absolute career height of his improvisational prowess and power. Shorter 's exploratory nature was in-tune with his own recordings of the time, 1969's Super Nova and 1970's Moto Grosso Feio, both on Blue Note and featuring, on one or both, his fellow Davis band mates. Corea, whose rapid ascension began with the one- two punch of Tones for Joan's Bones (Vortex, 1967) and Now He Sings, Now He Sobs (Solid State, 1968), began playing electric piano with saxophonist Stan Getz on Sweet Rain (Verve, 1967), but by this time he'd become far more conversant on the instrument, less an electric version of a grand piano, and more—with its chiming tines and often overdriven amplification—an instrument unto itself. Holland's ability to drive a groove home was often juxtaposed with a more liberated approach that transcended the usual rhythm section role of his instrument, as can also be said for the mercurial DeJohnette, who is sometimes delicate and elegant, but other times thunderous and tumultuous.

The audio on the DVD—a superb, multi-camera shoot allowing a real look into this touring band in action—is considerably better than that of the CDs, which is a tad thin and—at times—especially when Shorter is on soprano—a little shrill. Still, these performances are well worth getting past a little lower-fi production; you can only work with what you have, after all, and even remastered, there are limitations on the source recordings which cannot be transcended. Live in Europe 1969: The Bootleg Series Vol. 2 is, ultimately, the first major release to focus exclusively on Davis' post-In a Silent Way band, a quintet that would last, in this form, for only a relatively brief time before pianist Keith Jarrett—DeJohnette's partner in saxophonist Charles Lloyd's band—would be convinced, by Davis, to not only join the band, but desert his instrument of choice, acoustic piano, for both electric piano and electric organ. It is, indeed, about that time for this quintet—until now considered largely lost—to be finally found and given the special attention it so richly deserves.