Miles Davis, Miles Smiles, and the Invention of Post Bop 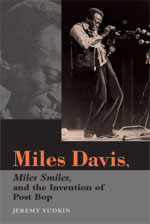 It would not be too far fetched to claim that trumpeter and bandleader Miles Davis was and remains the single most important figure in jazz history. While not saying as much, music educator and author Jeremy Yudkin supports such conjecture in his book Miles Davis, Miles Smiles, and the Invention of Post Bop. Davis' recording career spanned the almost 50 years between his first recordings in April 1945 with Herbie Field's band (First Miles, Savoy, 2003) and his final recorded dates with his sextet at the Hollywood Bowl August 1991 (Miles Davis Live Around the World, Warner Brothers, 1996).

The period during which Davis lived had him at least on hand for, if not instrumental in, the births of bop, cool jazz, hard bop, modal, post bop, and fusion. Davis' recordings are cited as among the first recorded in each sub-genre.

Approaching his subject, Yudkin provides background information beginning with the seminal 1949/50 Birth Of The Cool dates with an emphasis on and analysis of the Davis composed/Gil Evans arranged "Boplicity." Yudkin then passes through the April 1954 recordings of "Blue 'n' Boogie" and "Walkin'" before introducing the Christmas Eve 1954 recording of "Bags Groove," which is addressed at length and considered by Yudkin to be among the first, if not the very first, hard bop recording.

The author discusses the first Davis quintet (pianist Red Garland, bassist Paul Chambers, tenor saxophonist John Coltrane, drummer Philly Joe Jones) and its expansion from 'Round About Midnight (Columbia, 1955) to the sextet with alto saxophonist Julian "Cannonball" Adderley on Milestones (Columbia, 1958). Discussed in passing is the sextet's interpretation of Thelonious Monk's "Straight, No Chaser" with regards to Davis' affinity for the blues. The Davis original "Milestones" (not to be confused with his 1947 recording of the same title) is presented as one of the trumpeter's first experiments in modal composition, a prelude to the recording of Kind Of Blue (Columbia, 1959).

Kind Of Blue assumes its necessarily important position in Yudnik's introductory discussion. By March 1959, Davis' group experienced flux with the firing of the heroin-addicted Garland and Jones. In the studio, the piano chair was shared by Wynton Kelly and the then newcomer, Bill Evans, while the drum chair was occupied by Jimmy Cobb. The sessions that would become Kind Of Blue were recorded March 2 and April 6, 1959. Between these dates, Davis and the Gil Evans Orchestra appeared on the The Robert Herridge Theater Show, April 2. The show included Kind Of Blue's "So What" and "The Duke," together with "Blues For Pablo," and "New Rhumba" from Miles Ahead (Columbia, 1957).

With Kind Of Blue, Davis changed direction in composition. However, the change did not occur in a vacuum. From "Milestones" to Miles Ahead, Porgy And Bess (Columbia, 1958) and Sketches Of Spain (Columbia, 1960). Davis and Evans together experimented with playing over modes and scales as opposed to the fixed harmonic architecture of the 32 bar AABA song form. This experimentation was interwoven in Davis and Evans' big band recordings and Kind Of Blue. This experiment manifested in Kind Of Blue's "Freddie Freeloader" and "So What," the first two pieces recorded on March 2nd. "Freddie Freeloader" is a straight 12-bar blues while "So What" is the first fully conceived modal shot across the bow of the hard bop of Davis' first quintet. Yudkin proceeds to analyze in depth the history and sequencing of the original Kind Of Blue LP release, proposing an elaborate "arc" of album sequencing with Bill Evan's "Blue In Green" as the apex, and the palindromic solo order of "Blue In Green" placing Coltrane's solo at the apex.

This introduction sets the stage for Davis' second quintet, comprised of pianist Herbie Hancock, bassist Ron Carter, saxophonist Wayne Shorter, and drummer Tony Williams. This flavor of the Davis band is the most stable since the Milestones sextet. Active between 1965 and 1968, this new quintet was responsible for six albums that introduce the ill-defined jazz sub-genre post bop: E.S.P. (Columbia, 1965), Miles Smiles (Columbia, 1967),Sorcerer (Columbia, 1967), Nefertiti (Columbia, 1968), Miles In The Sky (Columbia, 1968), and Filles De Kilimanjaro (Columbia, 1968).

Yudkin chooses the second of these recordings, Miles Smiles, as his touchstone for his discussion of post bop. The author addresses each of the album's six pieces, using each to illustrate Davis' deeper exploration of modal performance mated with the brashness of hard bop in the up tempo songs and Bill Evan's introspective slower pieces. Yudkin argues effectively for the sub-genre post bop with Davis as the creator.

The author describes this music thus: "Forms, tempos, and meters are freer, all the compositions are new, and the band members themselves are featured composers...[music] that did not follow the conventions of bop or the apparently formless freedom of the new jazz." Miles Smiles proves to be an exceptional example by hosting three pieces (Jimmy Heath's "Gingerbread Boy," Eddie Harris' "Freedom Jazz Dance," and Wayne Shorter's "Footprints") that were previously recorded. The listener can listen to these selections side by side with the originals and hear exactly how well developed is Davis' new vision.

Yudkin closes with a definition of post bop: ..".an approach that is abstract and intense in the extreme, with space created for rhythmic and coloristic independence of the drummer—an approach that incorporated modal and chordal harmonies, flexible form, structured choruses, melodic variation, and free improvisation." That about sums up the sub-genre of jazz that has dominated the music since the late 1960s.