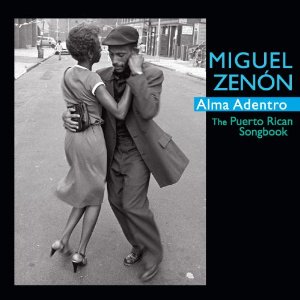 When so-called "Latin jazz" comes up in conversation, music or musicians connected to Cuba or Brazil are usually the topic of conversation. While it's true that Afro-Cuban stylings, bossa nova beats and sizzling samba numbers seem to dominate in this umbrella category, they're only the tip of the iceberg that is the music of Latin America. Thankfully, some important jazz musicians are helping to broaden the rest of the world's view on what Latin America has to offer. Pianist Danilo Pérez has connected the dots between music from his native Panama and jazz, and alto saxophone star Miguel Zenon is doing the same thing for Puerto Rico.

While calling somebody a "star" in jazz might seem like an oxymoron, when considering the lower-than-deserved profile of the genre on the national and international stages, Zenon fits the bill like few others. As of the recording of this 2011 album, Zenon, only in his early thirties, has already carved out a place as one of the defining saxophone voices of his generation. Having already received a Guggenheim Fellowship and MacArthur Fellowship (a.k.a. the "genius grant") at such an early age, some feel that he has been wrongfully fast-tracked in a genre where the experience of elders is usually prized over the enthusiasm and creative spirit of youth; but his solo albums and continuing work with the SFJAZZ Collective, as the only remaining charter member of that groundbreaking group, have confirmed how deserving he really is of all of the positive press, awards and honors that have been thrust upon him.

While Zenon has put out a few albums that don't touch on his heritage, Alma Adentro: The Puerto Rican Songbook is his third effort, following Jibaro (Marsalis Music, 2005) and Esta Plena (Marsalis Music, 2009), in promoting a fusion of Puerto Rican traditions and modern jazz ideals. While those earlier efforts were original affairs which tied Puerto Rican folkloric traditions into Zenon's compositional mindset, this album is about bringing Zenon's voice and originality into new arrangements of classic songs from his native country. Composers like Sylvia Rexach, Rafael Hernandez, and Bobby Capo receive their due here, as Zenon salutes their contributions to the Puerto Rican Songbook.

While this album doesn't match its predecessor—Esta Plena—in the rhythmic vibrancy category, it surpasses it in terms of musical scope, power and sophistication. Zenon brought Guillermo Klein on board to write arrangements for the ten-piece woodwind and brass ensemble that joins with the saxophonist's quartet, and the results are mesmerizing. Klein uses the large group to magnify the power of Zenon's horn lines ("Silencio"), create a harmonic haze ("Alma Adentro"), and accompany him in classy fashion during straightforward moments of musical clarity. Zenon's playing can be tender and romantic ("Amor"), or lithe and feisty ("Alma Adentro"), but his ideas always serve the song, and Klein's arrangements fit him like finely tailored suits.

While the large ensemble plays a big part in this ten song production, Zenon's connection to the members of his quartet is equally important. Zenon and bassist Hans Glawischnig seem to have a special bond together, as demonstrated during their duologue during "Temes," while drummer Henry Cole provides the sparks that help these songs catch fire. Pianist Luis Perdomo covers the harmonic middle ground, balancing things out between bass, horns and Zenon, as he helps to flesh out a complete picture of this music by filling in the spaces with just the right amount of sonic support.

Miguel Zenon has become the de facto spokesman for the jazz possibilities inherent in the musical DNA of Puerto Rico, and Alma Adentro: The Puerto Rican Songbook is another conceptual landmark and musical milestone in his already-impressive discography.