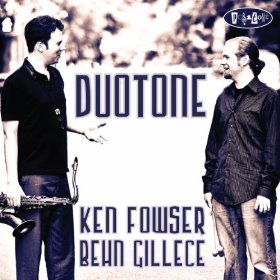 "Duotone" is a term that belongs to the world of photography, but it makes perfect sense when applied to this recording. Tenor saxophonist Ken Fowser and vibraphonist Behn Gillece superimpose their tonal colors and personalities against one another, to create an aural portrait that's both traditional and modern.

While the supporting personnel have changed on each of their three Posi-Tone dates, the basic template by which their music is designed remains, essentially, the same. On each album, the pair employs a quintet to deliver melodically-inviting material with impressive soloing , but they also branch out beyond this general description. "Spontaneity" features a wide developmental arc, which begins with impressionistic piano and loose, searching statements, eventually arriving at propulsive swing, and "Come Around Again" is an intimate, musical-dream sequence.

Both men own equal shares in this music but, as on Little Echo (Posi-Tone, 2010), Gillece serves as the primary composer. Fowser's contributions—the breezy, Brazilian-tinged "Bongo" and the hip, swinging "One For G"—come at the end of the album, after Gillece has already established himself as the compositional kingpin of the group. His music can be hypnotic ("Offset"), relaxed and carefree ("Low Ball"), or caffeinated and swinging ("Back To Back"), depending on the moment, but all of it remains highly accessible.

While the solid architecture of each piece speaks to the writing skills of Gillece, and Fowser on a smaller scale, jazz remains an improviser's art, and this album features plenty of soloing to attest to their strengths in this area. While they take the large majority of the solo spots, pianist Donald Vega is an almost-equal partner in this department. He steals the show on the up-tempo "Back To Back," and his bluesy piano work on "Offset" takes the song in a different direction.

The team of bassist David Wong, of drummer Roy Haynes' Fountain of Youth band fame, and überdrummer Willie Jones III are as good a rhythm duo as can be hoped for, and they provide superb support throughout the program. When the music requires intensity, they push and prod to perfection, but they also underline the cool characteristics of the slower, swinging material on the album.

Duotone isn't a radical departure from Full View (Posi-Tone, 2009) and Little Echo, but that's just fine. It's a winning program of original tunes that continues to show off the chemistry which exists between two exciting instrumental voices bound for the big time.