BY JACK BOWERS
December 8, 2017
Sign in to view read count 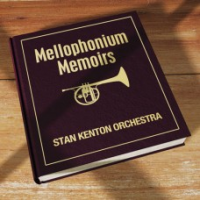 Among bandleader Stan Kenton's many ensembles, surely none has given rise to as many differences of opinion—pro and con—as the Mellophonium Orchestra of the early 1960s. Audiences generally loved the warm and inviting sound of the mellophonium, residing in a nether region between trumpet and trombone; musicians, on the other hand—both those who played the mellophonium and those who did not—were, to say the least, more ambivalent about the instrument's eccentricities and unwillingness to remain in tune. In the end, the final word was Kenton's, and he loved the mellophonium, so much so that he spoke in later years of rebuilding that orchestra's framework, even though the idea was financially and logistically impossible.

Whatever their shortcomings, there's no doubt that the mellophoniums gave the Kenton orchestra a sound unlike any of of its contemporaries, smooth and easygoing, counterbalancing to some extent Kenton's propensity for cataclysmic geysers of sound. The contrast is most well-defined on the ballads, two of which ("I'm Glad There Is You," "Easy to Love") introduce Mellophonium Memoirs, an interesting retrospective of the orchestra in concert performances from 1961-63. Even though some musicians found the mellophoniums intractable, there were others who mastered them to such an extent that they were able not only to underline their potential in an ensemble setting but to bring them to the fore as solo instruments as well. Two of the best were Gene Roland (heard on "Street Scene") and Ray Starling ("The Blues Story," "Waltz of the Prophets"). Starling is also present on the album's lone anomaly, a recording by the Ray Starling Trio (with the leader baring his chops as pianist and singer), recorded in New York City circa 1964.

As the Kenton orchestra had been in business for two decades before the mellophoniums were added, a number of enduring favorites were already in the book including Ray Wetzel's impromptu "Intermission Riff," Bill Holman's fiery "Malaguena," Marty Paich's classic arrangement of the standard "My Old Flame," "The Peanut Vendor," Dee Barton's "Waltz of the Prophets" and of course Kenton's theme, "Artistry in Rhythm" (here, "Artistry in Bossa Nova"), all of which are reintroduced in their mellophonium incarnations. As always, the orchestra boasted a number of talented soloists, most notably trumpeter Marvin Stamm, alto saxophonist Gabe Baltazar, tenor Charlie Mariano and trombonist Bob Fitzpatrick. And by 1963 Kenton had added another spicy ingredient to the mix: Jean Turner, a classy band singer who nourished the legacy established by Anita O'Day, June Christy, Chris Connor and Ann Richards. Even though the mediocre sound does her no favors, Turner sings capably on "A Lot of Livin' to Do," "Give Me a Song with a Beautiful Melody" and "Let Your Love Walk In."

Before setting aside the issue of sonics, it must be noted that sound quality and over-all balance are the basic weaknesses in an otherwise admirable anthology. These are, after all, concert performances, recorded at nearly half a dozen locations on equipment that for the most part wasn't equal to the task. As a result, the sound varies widely, generally to the detriment of the orchestra and soloists, a flaw that is amplified by random audience intrusion. On the other hand, Mellophonium Memoirs wasn't meant to be a pristine replication of Kenton's Mellophonium Orchestra but a special souvenir for those who remember and appreciate its uniqueness and flair, and for others who may simply wonder what all the fuss was about. As such, it is a charming codicil to the Kenton canon.

I’m Glad There Is You; Easy to Love; Intermission Riff; Street Scene; The Blues Story; Maria; Malaguena; My Old Flame; Waltz of the Prophets; It Might as Well Be Spring; The Peanut Vendor; All the Things You Are; What Is Love; Tuxedo Junction; A Lot of Livin’ to Do; Give Me a Song with a Beautiful Melody; Let Your Love Walk In; Begin the Beguine; Artistry in Bossa Nova.