By Gareth Thompson
December 8, 2017
Sign in to view read count 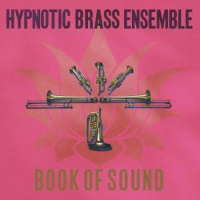 A group playing brass instruments in a New York subway once hypnotised a businessman. He was so mesmerised by their music that he stood listening for ages and missed numerous trains. Relaying this later to the performing band of brothers, he helped create their name.

Book Of Sound is the second album by Hypnotic Brass Ensemble on Honest Jon's Records, a label run in conjunction with Damon Albarn. The act's self-titled debut was a steamy brew of rapping rhythms and brassy busking, thus fusing two forms of street music. The percussion has been dropped for this outing, leaving the focus on a chorus of trumpets, trombones and more besides.

HBE are all sons of the late Kelan Phil Cohran, a man whose legacy runs deep across Chicago. Not just a fine musician with Sun Ra Arkestra and many others, Cohran also formed the Afro-Arts Theater for musical and political events. He passed away in June 2017, only months before Book Of Sound was released. If it's intended as a tribute to their father, then his boys have done him good. This album brings a tranquil wave to your soul. It doesn't lack vitality, but there's an inner peace within the fervent and prayerful beauty of each track.

So the vibe this time is more grieving than grooving—closer to the Balkan blues of Boban Markovic Orkestar, or the muted exuberance of Menahan Street Band. HBE still sound like cool streetwise cats, but with a wise and experienced edge.

Opening track "Lead The Way" brings humming vocals and bouncing brass, like a strange invocation. The trumpet lines of "Purple Afternoon" float among serene upright bass notes as if praising a sunset. "Kepra" finds one brother singing a treble line above long brassy tones—each drawn from deep breaths like a meditation. "Morning Prayer" has a circular drone with melodies that drift and murmur, creating a sacred air.

Elsewhere we get "Now" where another chant shimmers in as instruments tease back and forth. "Midnight" features the voice of Aquilla (one of three mothers to the band) with divine trumpet and flute lines over hypnotic guitar. Aquilla's voice keens like a lament for Cohran, but might also be guiding his soul onwards. Some of Alice Coltrane's ashram music comes to mind here. "Sri Neroti" features another mother, Maia, piping sweetly on piccolo amid the stately baritone brass.

HBE admit they were taught cosmic ideas from a young age, about the stars and planets making their own music. Listen closely to Book Of Sound and you might just hear the universe sighing in admiration. Or perhaps, as Sun Ra once informed us, space really is the place after all.