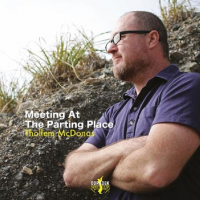 Coming at improvisational music from the classical realm, pianist Thollem McDonas remains resolutely outside of the main stream of the jazz world. Primarily inspired by, as he puts it in his liner notes to Meeting at the Parting Place, ..."European concert music from the Renaissance to the 20th Century and jazz, particularly of the '60s and '70s" McDonas has consciously chosen a more difficult—but more artistically rewarding—path. He's one of those rare artists whose modus operandi is predicated upon the development of a highly personal approach to music-making, and one that encompasses all of his experience—musical or otherwise—thus far. For McDonas, this includes seemingly endless travel, numerous musical associations that span vast economic and cultural differences, and significant work in punk rock (with Mike Watt, John Dieterich, Brian Chase, and with the Italian band Tsigoti), overtly jazz-based improvisation (trios and duos with Lukas Ligeti, Nels Cline, William Parker, and Michael Wimberly), classical music (with collaborators such as Pauline Oliveros and the late cellist Stefano Scodanibbio), and in various multimedia settings. It's as if his main intent is to remain—or become—truly open to all possibilities.

To some, an album of improvised music for solo piano may seem to be an insurmountably difficult listening experience. Nothing wrong with that. And McDonas pulls no punches here; his virtuoso improvising is as freewheeling and challenging as ever. Yet, Meeting at the Parting Place is, above all, a work of art that invites its audience to lean in, enveloping the listener in a sound world that is simultaneously strange and familiar. Perhaps Thollem's most thoroughly inviting and enjoyable recording thus far, Meeting at the Parting Place is replete with Moorish, North African, and Middle Eastern harmonies, rhythms and motifs. Even the dissonant staccato bursts and inside-the-piano manipulations that open "The Improbability of Now" resolve into rhythms and melodies that seem flamenco-inspired. A host of other influences and interesting tendencies seem to pop up unexpectedly; there's a sequence about 13 minutes into "Facing West to the East" that could be a coup de chapeau to Cecil Taylor, there are also hints of minimalism and passages of Satie-like delicacy and charm. McDonas' manic humor is also quite evident throughout: he particularly likes to "crush" passages of highly technical classical technique with sudden bursts of dissonant chords or even-more-manic scrabblings.

Though each of the album's four long tracks exceeds 15 minutes in length, there are pauses, breathing spaces, and lacunae within that presage significant diversions and variations. These gaps and discontinuities serve McDonas' music well, and remind the listener that there's a thinking, feeling, breathing human being doing these amazing things with a piano. Some of the album's most breathtaking moments come right after these pauses; such as the dark-hued rumination that follows the opening sequence of "The Improbability of Now." Meeting at the Parting Place is a true tour de force of spontaneous music creation; a wonderful example of what happens when immense technique, boundless inspiration and highly focused artistic vision converge.

Revelations of the Sun; Facing West to the East; The Improbability of Now; And Each Other.