Kenny Werner: Me, Myself and I 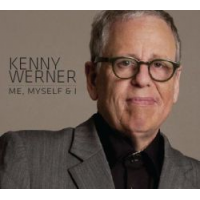 Pianist Kenny Werner, though comparatively unsung, has been appreciated by many since forming a trio in 1981. He is also known for his series of stellar duos with harmonica virtuoso Toots Thielemans. Additionally, he has done yeoman duty with guitarist John Scofield, bassist Dave Holland and saxophonist Joe Lovano, all the while—for more than 20 years—working as arranger and accompanist for singer Betty Buckley.

Me, Myself and Iwas recorded solo in Montreal, Canada at the small Upstairs Jazz Bar and Grill club, in June, 2012, during the city's renowned jazz festival. Of this engagement, Werner says that the "ideas just kept flowing." He was feeling so good about his playing that he mentioned it to owner Joel Giberovitch, who decided to make a live recording. This is the satisfying result.

From the get-go, Werner's relaxed and lightly swinging style is apparent. Of the seven sides, one is an original; the others are pop and jazz standards. The intimate setting is conducive to long takes—four of them last from 10 to 13 minutes or more—giving ample opportunity to stretch and extend his ideas.

Werner explores Monk's familiar "'Round Midnight," excavating shards of melody which he shapes into his own impressionistic creation. Werner's own "Balloon" becomes a tone poem based, he says, on the life of a helium balloon. Appropriately, the melody drifts along, suddenly soaring before the sphere inevitably runs out of gas and slowly floats down, the song ethereally resolving. John Coltrane's "Giant Steps" surprises, being rendered in a light and lyrical manner—not with solid "sheets of sounds," as a critic once described Trane's style.

Two standards round out the album. "All The Things" (Jerome Kern and Oscar Hammerstein's "All the Things You Are") shows Werner's ballad prowess, hinting at an indebtedness to Bill Evans but finishing in a blaze of notes. He plays an extended version of Thad Jones and Louis Ouzer's "A Child Is Born," examining every aspect of this lovely piece. In a charming touch near the end, he whistles the song.

Hearing Werner alone and unfettered, as on Me, Myself and I, is a great opportunity to fully appreciate his ample talent.

Round Midnight; Balloons; All The Things; blue is green; I Had a King; Giant Steps; A Child is Born.

Title: Me, Myself and I | Year Released: 2012 | Record Label: Justin Time Records