McCoy Tyner: alone and (in spirit) with SFJAZZ Collective

By J Hunter
December 4, 2009
Sign in to view read count
Usually, the kind of passionate tribute SFJAZZ Collective delivers annually is reserved for artists who are either no longer on the scene, or whose productivity has seriously tanked. However, current honoree McCoy Tyner fits neither of those definitions. The pianist's winter 2009 disc follows the remarkable CD/DVD package Guitars (Half Note, 2008), and is Tyner's third project for his own production entity McCoy Tyner Music. That said, Tyner and the Collective appear side-by-side here; as well as both of them being live dates with Tyner as a common denominator, both projects came about—directly or indirectly—because of the commendable Bay Area non-profit organization SFJAZZ. 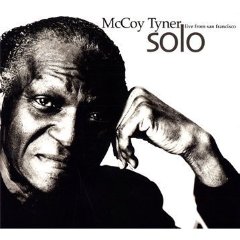 Don't ask Tyner what he's going to play when he does a solo-piano concert, because his guess is only as good as anyone else's. According to Tyner, the music pretty much reveals itself. Annoyingly, that statement conjures images of Keith Jarrett sitting motionless at the piano, patiently waiting for inspiration to waft in from the wings. Sitting around is not an option on Solo: Live from San Francisco, recorded earlier in 2009 at the Herbst Theatre during SFJAZZ's spring season.

The opener, "African Village," blasts off like a bat out of somewhere, Tyner's free foot pounding out the beat as he moves between meditative lines and thunderous chords. Like Dave Brubeck, Tyner's chord work is highly distinctive, with a texture and a pressure that few can match, and his revelations come from how each piece shifts, expands and elevates above its original form. You can hear the original melody on John Coltrane tunes like "Lazy Bird" and "Naima," but Tyner (like the saxophonist) only uses those melodies as springboards to the next level.

Tyner's "Just Feelin'" and Nat Cross' "I Should Care" both have an insistent undertone, but that's all they share. "Feelin'" sounds like an offshoot of "Contemplation" - a driving Guitars tune Tyner performed with guitarist Bill Frisell - while "Care" stands on its own as it forms into a turbulent ballad. "You Taught My Heart To Sing" is also a ballad, but Tyner proves ballads don't have to be soft. After all, one of the cool things about love is being able to shout about it from the rooftops.

It's not all deep and meaningful on Solo. "Blues For Jeff" is straight-up boogie-woogie, there for nothing but the fun of it, and Duke Ellington's "In A Mellow Tone" has that rousing dynamic Ellington liked to infuse in many of his pieces. Tyner knows how to treat a standard: give it respect but not awe, because awe hinders creativity. While Tyner is known (fairly or unfairly) as a power pitcher, Solo shows that being explosive and being expressive are not mutually exclusive approaches. What's more, Tyner's laughter over the applause shows he's still having a great time proving that.

Visit McCoy Tyner on the web. 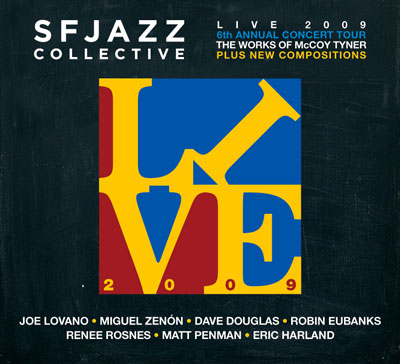 Thanks to the departure of Stefon Harris, Live 2009 marks the first season SFJAZZ Collective has worked without a vibes player. Given that this personnel change leaves the Collective with "only" a septet, it's pretty hard to say the group's musical scope has been hamstrung. If anything, its thrilling tribute to McCoy Tyner proves less really is more, especially with a band that offers so many elements as it continues to stretch its own boundaries.

A collection of growls, moans, and whistles from the front line opens pianist Renee Rosnes' stunning arrangement of Tyner's "Fly With The Wind." This preface seeks to simulate sunrise on the plains of Africa—one of many places Tyner sought musical inspiration. Rosnes' in-the-clear introduction of the melody is stark and beautiful, and adds impact to the big lines and chords from the rest of the group. After saxman/artistic director Joe Lovano's alluringly loose solo, Rosnes returns to launch a brilliant cascade of notes while Robin Eubanks' trombone growls from underneath.

The Collective's love for Tyner's music is evident in altoist Miguel Zenon's souped-up take on "Four By Five" and bassist Matt Penman's expansive workup of "Three Flowers," while Lovano goes deep into the heart of "Aisha" with a romantic solo that enriches the only Tyner tune Coltrane ever recorded. However, the experimentation in trumpeter Dave Douglas' take on "Peresina" or drummer Eric Harland's arrangement of "Consensus" shows that these players approached Tyner tunes the same way Tyner approached other people's music: always with respect, never in awe.

While the original pieces on Live 2008 (SFJAZZ, 2008) had a tendency to meander, the Live 2009 originals maintain focus while retaining creativity. Lovano's "Jazz Free" is the kind of challenging, in-the-moment work Lovano has presented in the past, only on a grander scale. Eubanks' celebratory "Yes We Can: Victory Dance" and Harland's dizzying "E-Collective" uses the band members themselves as instruments. Eubanks has his partners clap out the piece's intricate foundation riff, maintaining it during rousing solos by Rosnes and Douglas; Harland has the horn players chant the accents of the Indian tala rhythm that drives "E-Collective."

SFJAZZ Collective continues to do it right, showcasing works by important artists while demonstrating the influence those artists have had. Of course, in the case of McCoy Tyner, "influence" should be in the present tense.

Tracks: African Village; I Should Care; Lazy Bird; Naima; Just Feelin'; You Taught My Heart To Sing; Blues For Jeff; Ballad For Aisha; Sweet And Lovely; In A Mellow Tone.