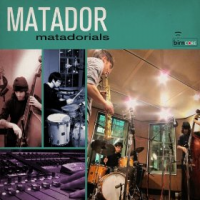 The quiet and thoughtful Matadorials never confuses intensity with volume and projects the studied, assured confidence of musicians equally adept at mainstream, free, modern/progressive jazz and whatever might come after that. Several titles prove most descriptive: The somber "Sullen Skies" sounds more like a studied classical miniature than like jazz, especially when someone's singing voice doubles the saxophone's melody line, and empties into total silence before the bassist picks up his solo. "Oslo" almost imperceptibly opens with percussion that softly rattles like icicles scraping against your windowpane, and then floats through a meandering melody barely tethered together through the lightest of musical threads.

In the opening "Lisney Dand," Darrell's walking acoustic bass bumps and nudges Sachs's alto, as sharp and dry as Paul Desmond's, like a playful yet obedient pup following its master's walk. It's a quietly adventurous sound, perhaps even the new cool school: Sometimes all three seem to be soloing simultaneously, sometimes they seem to be playing in tight unison, and sometimes no one's playing at all. But the trio won't let you take "Lisney Dand" too seriously; it's arranged to deliberately sound like a skipping vinyl record—twice.

Sachs's airy, nimble alto in "Reaudition" also brings to mind, in addition to Desmond, Mel Collins' beautiful work in King Crimson on such albums as Islands (Editions EG, 1971). So does the subsequent jumbled jazz of "Disarray," which the trio, especially drummer Young Song, scrambles into frothy rhythms—the interwoven sound of a band conversing among itself.