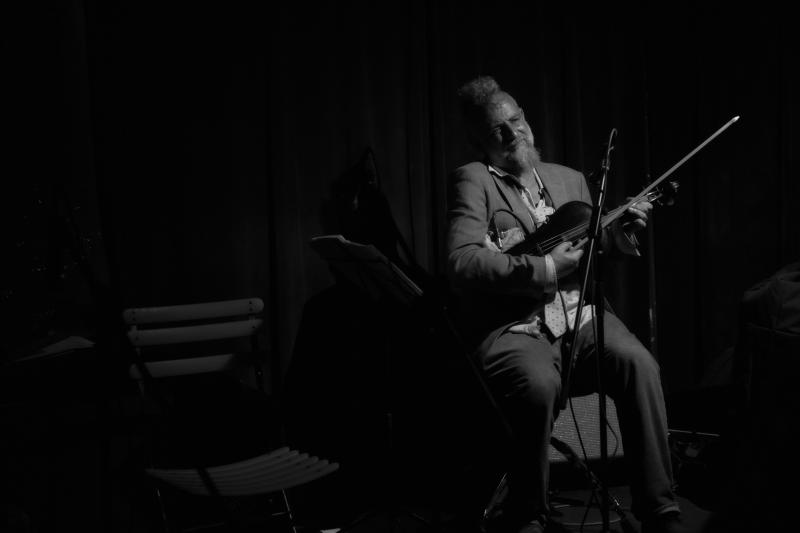 To hear the music of violist Mat Maneri and pianist Lucian Ban is to hear your own heartbeat: both require intimacy without distraction. In Brooklyn's Barbès, such mechanisms of the body become audible. The venue is a home for them, and its thickly curtained performance space allows the duo's balance of form and freedom to nourish itself.

Maneri and Ban have toured extensively as Transylvanian Concert since their ECM album of the same name was released in 2013. On that album, the purity of Maneri's microtonal crooning found ideal context in Ban's poetic compositions, and on this temperate Saturday night they pulled the implications of that collaboration in freshly kinetic directions.

The set consisted mostly of Ban originals, which by their force of evocation spun a wealth of moving images in which to immerse. Indeed, Ban is not a proverbial painter at the keyboard but rather a filmmaker, directing his melodic actors but also letting them improvise their own flesh around skeletal scripts. His "Mojave" elicited a soulful, baying quality from Maneri, and tilled plenty of soil for the violist's thickly rooted double stops. Ban plied especial brilliance in "Transylvanian Dance" and "Monastery," both based on Romanian folk motifs. These forested tunes, in which thematic confluences shined like shafts of moonlight, brought fierce joy into the foreground. The boisterous ride of "Okay Now" was likewise engaging, as it flirted with Bach and sported some monstrous pizzicato. Yet it was the darkest night of "Untold" that held deepest attraction. It might as well have been called "Unfold," for it seemed to open new layers of meaning as Ban waxed mountainously throughout. Maneri's own "Passing" focused the lens further. Like an epitaph anagrammed into a new language, every note became laden with bluesy meaning.

Two guest appearances rounded out the concert. For Ban's "Not That Kind of Blues," the duo was joined by intrepid violinist Skye Steele. Shades of Gershwin clashed with backwater muddiness from the strings while Ban brought the fire. (The spirit of Willie Dixon was lurking in there somewhere.) And for a moving performance of Paul Motian's "Fantasm," violinist Gabe Terracciano proved himself a kindred spirit to Maneri's notecraft. He was the dream within a dream, enlivened by incomparable inertia.