BY MARK CORROTO
December 16, 2013
Sign in to view read count 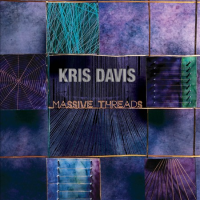 The first five minutes of "Ten Exorcists," the opening track of Massive Threads by pianist Kris Davis, consists of minimalist repetitive percussive playing of her prepared piano. The Steve Reich-like repetition mimics percussive tape-loops that cease, but the momentum endures and lays the foundation for her solo.

This solo outing benefits from Davis' classically trained ear, the follow-up to her first solo attempt Aeriol Piano (Clean Feed, 2011). Her background has earned her praise, writing for jazz ensembles led by Ingrid Laubrock and Tony Malaby, and for her piano trio and a collaborative unit Paradoxical Frog.

The title track, originally written for six pianists, opens with Davis overdubbing just one additional track over her playing. The eleven-minute piece begins as a dance, then thickens with gargantuan chords that rumble with a (not-distant) thunder. The heaviness of the storm gives way to a music box sound of simplicity played under clearing skies.

Her use of rhythmic timing—as on "Dancing Marlins" and "Leaf Like"— levitate the spirit, while the introspective "Slow Growing" exhibits a meditative maturity to her playing.

Her take on Thelonious Monk's "Evidence," the only cover on the recording, eschews the surprise of Monk for a sort of hallucinogenic effect. The dream-like state summoned suggests the near catatonic state the great man was imprisoned in, at his life's end. It is easy to imagine Monk recalling this tune from the foggy state of his final days.