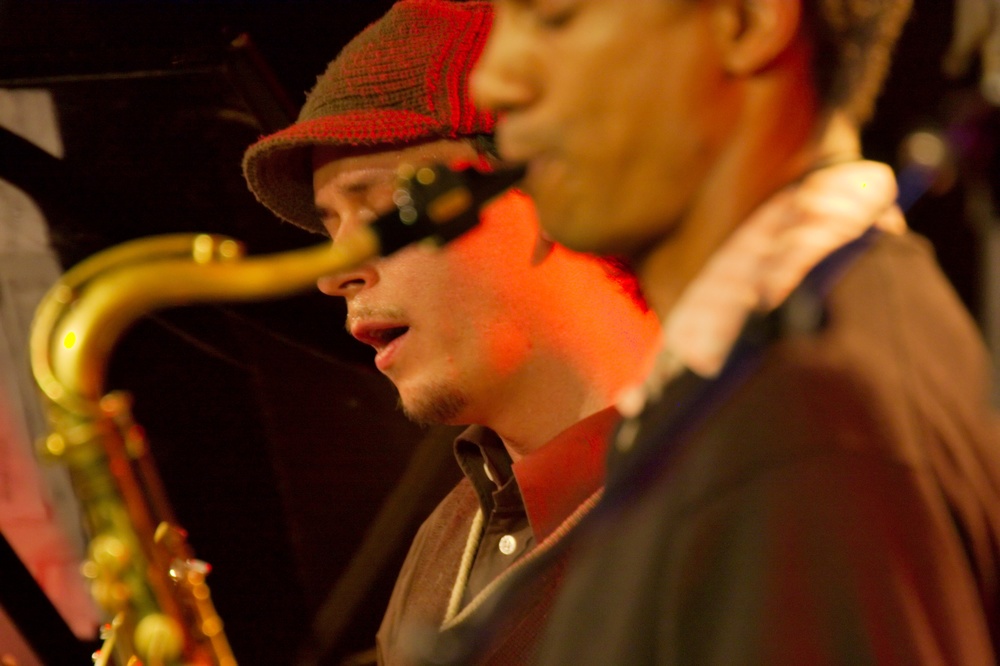 By KURT ROSENWINKEL
October 17, 2017
Sign in to view read count
This article first appeared in issue no 8 of Music & Literature Magazine.

I remember being at Berklee and listening to Mark in the practice room. A lot of people used to gather outside his practice room at various times and just listen to him. He would be in there ten hours a day, usually. And then I heard him in a cafeteria concert—I think he was with Paul LaDuca and Jorge Rossy—and he was playing a lot like John Coltrane. He was really in deep; he was absorbing everything he could from Coltrane at that time.

People's first impression of Mark is usually of a stoic remoteness to the atmosphere around him. It's interesting, because I had that feeling too, but now that I know him so well, I know that that's just a first impression. Once you get to know him and his playing, you feel its empathy, its warmth and generosity. But my first impression was like, "Woah, this guy is deep into this very rarefied area." We didn't really hook up until a couple years later, around 1992, in New York, when I had a trio with Ben Street and Jeff Ballard. At one point we were playing and somebody was like, "You know, Mark's living down the street. We should call him." So we called him and he came over and it was like, boom! That was it. Then it was a quartet. And we just went from there.

We got a weekly gig at Small's jazz club. Over the next excellent seven years, we pretty much only played local gigs, so we had a lot of time on our hands; we weren't really busy like we are now. We would play our Tuesday night gig, and the rest of the time we'd be practicing on our own. I'd be writing a lot of music, and we'd get together two or three times before the next gig and rehearse the new material. We had some other gigs together, too—we had one at the Three of Cups, another club in New York, and in the beginning, we were playing a mix of standards and my music. I remember this one time, I think we were playing "Satellite" by Coltrane, and it was at the end of the song, we were vamping out, and Mark and I started playing together, sort of soloing together, and the four of us hit this zone. It was almost like we blasted out of the atmosphere and found ourselves in this different solar system and everything we did was just magically going together. And I remember, particularly, this one moment that Mark and I had: we played a run together—we were improvising, but we played exactly the same notes, not just one or two but an entire phrase. It was amazing. That was when I think we all realized the potential that we had as a group. I think it encouraged us to work harder and do more. We were always feeling this kind of magic chemistry between us, and we continued to develop over the next ten years.

When we became a quartet, that started feeding into my writing. My writing was developing with the sound of the group, which was developing from the sound of my writing, and also developing from everything that we were listening to together—Keith Jarrett's American Quartet or Duke Ellington or Joe Henderson or Sonny Rollins—all these different touchstones that we all had in common. And then, as we were practicing together, the way that everybody was interacting would start to inform the way I would write. And because Mark and I were developing our own personal styles in the presence of one another, there was a lot of cross-pollination. He would grab something from me and I would grab something from him, and in between songs, we'd be working stuff out. We were developing our own personal language together. His playing definitely informed my playing and my writing, and vice versa.

One of the things that's particular to us is this mind-reading thing where we can play a rubato melody and play every single note exactly together, no matter what or where we put it. And, interestingly, this also goes for written music. I made a record called Heartcore, and it was music that I made in my studio, and I asked Mark to come over and play on something and I didn't really have a chart. All I had was a short-hand scribble that I'd written out for myself that was almost illegible. I gave it to him and was like, this is all I have, and he just read it and just knew what it was. He played incredibly, completely on-target, everything perfect. It happened again on my most recent album, Caipi, which is kind of similar to Heartcore, and I had him come into the studio, and again, it was just a bunch of dots on the staff without any stems or any rhythmic delineations, just a bunch of note heads bunched together. I hadn't bothered to write it out for myself because I knew what the rhythms were, but that was the chart I had for him. It was a mess. And the same thing happened, it was hilarious. He just knew, he just knows! There's a real feeling of closeness there.

One of the most special things about Mark is the absolute egolessness of his involvement with music. He can do anything he wants on the saxophone; his abilities are completely unlimited. But he never has any particular agenda; he's just responding to the music at that moment, and his concern is with shaping the whole performance or song. So that results in a few things: it results in patience, and taste, and maturity, and empathy and graciousness and grace and blending and making and generosity. And then, in those moments where it's needed, because of the same reasons, he might just absolutely tear the roof off. And he can do that because of that natural, stable place from which he's coming. He's always a very grounded presence.

Mark is one of the most dedicated people I've ever met, both musically and in terms of his personal, spiritual journey in this life. He's very methodical. He's very patient. I remember when he almost cut off his hand with the electric saw: everybody was in shock—except for him! And the first time I talked to him after that, he was like, "Yeah, you know, I've had a pretty good run. It's okay." He had already accepted, and was already okay with, the prospect that he'd never play again. To me, that really illustrates where he's grounded. He's not grounded in this world; he's grounded in a deeper—not deeper, but larger—spiritual world. He's able to let go of any worldly things because he knows that his true root and home is in this larger, spiritual, cosmic world.

And another little anecdote about him that's really funny is: Because of where he's coming from, nothing around him really bothers him. And when we started to play internationally in concert halls, I remember many times, we'd be playing and he would take a solo and then I'd be taking a solo and then I would look to cue the melody out —and he wouldn't be there! And I'd turn around and he'd be behind us, on the floor, doing yoga! And I'd look at him and I'd be like raising my eyebrows like, "Here we go! It's coming around!" and he'd give me this look—like a thousand-mile stare. Actually, it was more of a complete, unaffected, no expression, just looking at me like—blank. And it always made me laugh. 'Cause you always knew he would be there—he'd just be nailing it. That was funny, 'cause that happened all the time, he was always doing that. It made me love him a little bit more each time.