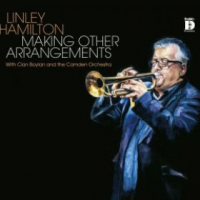 With albums like Taylor Made (Lyte Records, 2011) and In Transition (Lyte Records, 2014), trumpeter Linley Hamilton established himself as a virtuoso and bandleader of some note, surrounding himself with Ireland's finest established players while nurturing the island's best of the up-and-coming talent. With Making Other Arrangements (Teddy D Records, 2018) Hamilton enlists an eighteen-piece band featuring the strings of the twelve-piece Camden Orchestra on a set of classic tunes straddling the worlds of jazz, cinema and popular song. Employing strings marks the realization of a long-standing ambition, ever since Hamilton first heard Freddie Hubbard's Ride Like the Wind (Elektra/Musician, 1982) twenty five years ago. The results are performances of warmth and soul where the smallest details say as much about the love invested in this project as the excellent playing of the ensemble in full voice.

Strings provide a velveteen cushion for emotive solos by Hamilton, tenor saxophonist Brendan Doyle and alto saxophonist Ben Castle on the two contrasting ballads that open the album—Artie Butler's meltingly beautiful "Here's to Life," which became a signature tune for Shirley Horn—and Freddie Hubbard's two-geared "Brigitte." As Hamilton acknowledged in a 2014 interview with All About Jazz, Hubbard was a seminal influence, although if anything the Irish trumpeter's playing here is more aligned with Wynton Marsalis, particularly the mellow Marsalis of the Standard Time... albums.

As fine a balladeer as any, Hamilton also possesses tremendous technical chops, though with rare exception this is an album less of pyrotechnic displays and more one of deep emotional connection to cherished songs. The trumpeter's uplifting tone on James Taylor's "Don't Let Me Be Lonely Tonight," his bluesy lyricism on David Foster's "After the Love Has Gone"—with a Gershwins-esque string arrangement from pianist Cian Boylan—and his passionate yet caressing interpretation of Abdullah Ibrahim's classic "Joan Capetown Flower" exemplify Hamilton's natural melodicism and his preference for heartfelt narrative over technical show.

However, it's the ensemble voice—with or without strings—that makes for the album's success. Bassist David Redmond, drummer Guy Rickarby and Boylan provide a solid rhythmic bass, Nigel Clarke adds sparkling cameos on acoustic and electric guitar, while Doyle and Castle's every intervention injects brio. South Carolina-born, Lisburn-based R&B singer Dana Masters brings a helping of southern soul to Frank Golde/Peter Ivers' "Louisiana Sunday Afternoon," her powerful performance buoyed by strings, shimmering Hammond organ and vibrant jazz accompaniment. More of Master—who sings regularly with Van Morrison—would have been nice, but that, perhaps, is a whole other album.

Ivan Lins "Love Dance" and Michel Legrand's "What Are You Doing The Rest of Your Life" bring out the romantic in Hamilton—and some of his most persuasive playing—while Maggie Doyle's "Carmel" rounds out the album in style, this cheery tune with strings and percolating percussing evoking 1960s Burt Bacharach.

Cian Boylan's savvy arrangements of these classic tunes is an important piece of the equation, setting up a platform for first-rate performances from all the musicians. Hamilton, however, is the driving force. As a bandleader and soloist par excellence Hamilton stamps his personality on every tune, making Making Other Arrangements a highpoint in his career. It's a beautifully crafted recording that should appeal to all those who appreciate a fine melody sincerely delivered.