By MARK SULLIVAN
November 6, 2016
Sign in to view read count 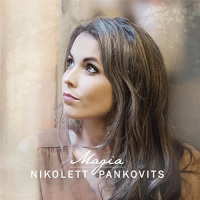 Vocalist Nikolett Pankovits was born in Hungary, but she found her musical direction in New York City melding Hungarian songs with Latin American rhythms. She has a lovely warm voice, with almost no vibrato. Magia (the Spanish and Hungarian word for magic) is an eclectic mix of traditional Hungarian songs, torch songs, one Great American Songbook standard, and one original. The album opens in traditional territory, with the Béla Bartók arrangement of "Kis Kece Lányom." "Madárka, madárka" is also a traditional song (collected by Zoltán Kodály) but this time guitarist/arranger Juancho Herrera gives it a Latin feel—the sort of unusual stylistic crossroads the album abounds in.

The torch songs come courtesy of the repertoire of legendary Hungarian actress/singer Katalin Karády, who is famous for her rescue of numerous Hungarian Jews during World War II. They are given spare arrangements with acoustic guitar, drums, and upright bass. Guest saxophonist Greg Tardy adds an additional color to "Fogadj El Engem."

Two other songs share a similar vintage. "Gloomy Sunday/Szomorú Vasárnap" (aka "Hungarian Suicide Song") was published in 1933, and made famous with Billie Holiday's 1941 version in English. "Don't Ask Me Who I Was/ Ne kérdezd ki voltam" is a 1941 song also associated with Karády, with Pankovits' English lyrics. This is very dark material, on the topics of suicide and faithless love. Pankovits sings them beautifully, but I have to say that I was not convinced emotionally. She just seems entirely too sunny for such bleak feelings.

She redeems herself with the closer, the Mandel/Bergman standard "Where Do You Start?" With the help of pianist Jason Lindner and Tardy's saxophone, this beautiful song about divorce finds just the right tone. Other standouts include the Balkan dance rhythm of "La Dama De La Muerte," with a dialogue between trumpeter Josh Deutsch and violinist Zach Brock (who is second only to Herrera as MVP of the session). On the sole original, "Stop For A Moment," Herrera is featured on electric guitar for the only time.

Nikolett Pankovits makes a strong debut here, aided by Herrera's skillful arranging and a strong supporting cast of musicians. It will be interesting to see what she does next.