BY BRUCE LINDSAY
November 6, 2015
Sign in to view read count 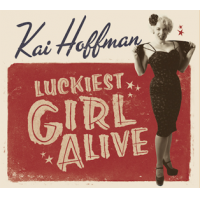 Kai Hoffman is the self-confessed Luckiest Girl Alive, or so this album would have it. She certainly sounds like a contender for the title across most of the 14 songs, crafting a definite and infectious feel-good atmosphere along with her quintet.

Hoffman was raised in Boston but has been based on London for some years, hosting regular club nights at Ronnie Scott's Club since 2008. Her striking visual image is matched by her musical style—which results from her obvious love of '50s and '60s R&B and rock and roll as well as swinging jazz. Luckiest Girl Alive is her second solo album. It follows Do It While You Can (Broad Reach Records, 2013), but with an all-new set of musicians.

The luckiest girl alive must, almost by definition, have the luckiest lips. Hoffman opens proceedings with a swinging version of Leiber and Stoller's "Lucky Lips"—complete with Dan Faulkner's gritty R&B tenor solo. It's a great track, even if listeners of a certain age might associate it more closely with UK pop's legendary Cliff Richard. "Jump Jack Jump" leaps along in fine vintage rock and roll style—guitarist Simon Picton adds a brief but authentic-sounding solo and Nina Ferro's backing vocal is a fine match for Hoffman. The band's own backing vocals are enthusiastic and fun—at their best on the call-and-response chorus of "I Want You To Be My Baby" and the jolly if silly "Deep Sea Ball."

Hoffman's voice—clear, precise, diction coupled with a sassy edge—suits the upbeat material which forms the bulk of the album's tracks. On the slow, downbeat "Late Night Joints," written by Hoffman and bassist Dave O'Brien , she's less convincing in the role of a world-weary habitué of early- hours bars despite atmospheric backing from the band. On "The Night Is Never Long Enough" and the slinky "Seat Of Your Pants," both slow numbers but with a seductive and romantic tone, she's back on form.

It's not all plain sailing for Hoffman. "TV Is The Thing This Year," she declares, even though her own television appears to need an inordinate amount of attention from the local repairman. Yet she sounds incredibly pleased even when it's obvious that the repairman needs to visit every night. Well, she is the Luckiest Girl Alive.

Lucky Lips; Jump Jack Jump; It's Raining Outside; The Night Is Never Long Enough; Luckiest Girl Alive; TV Is The Thing This Year; Star Of Fortune; Late Night Joints; I Want You To Be My Baby; Seat Of Your Pants; Lies Lies Lies; Hot Rockin' Diva; Deep Sea Ball; Drown In My Own Tears.