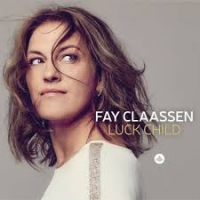 Dutch singer Fay Claassen has taken her sweet time releasing a follow-up to her 2010 big band release, Sing (Challenge). Her most recent recordings before sing include Red, Hot & Blue: The Music of Cole Porter (Challenge, 2009), and the uniformly excellent Two Portraits Of Chet Baker (Munich, 2006), all uniquely their own works of art.

On Luck Child, Claassen steps out of the standard's-heavy arena, devoting her attention to more contemporary fare like the funky blues of Paul Simon's "One Trick Pony" and an airy take on the Beatles' "Blackbird." The singer takes on more modern jazz compositions like Fred Hersch's "Song of Life," with lyrics by Norma Winstone and Cedar Walton's "When Love is New," lyrics by John and Paula Hackett. Kenny Wheeler's "Fay," dedicated to the singer provides a breezy melody for Claassen's wordless singing.

Pianist Olaf Polziehn's is graceful and well-suited to Claassen's light touch. The American traditional "Oh Shenandoah," is pleasantly lit by the singer's clear alto, cushioned on Polziehn sparse support. Claassen updates "God Bless the Child" with a bit of jaunt in its strut. She closes the disc with a wordlessly dreamy "Cinema Paradiso" that beautifully captures this fine singer in full flight.

Luck Child; One Trick Pony; Song of Life; Blackbird; Fay; In a Sentimental Mood; Finding You; When Love Was New; Oh Shenandoah; Miniature No. 7; A House is Not a Home; God Bless the Child; Cinema Paradiso.