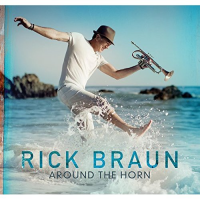 There's only so many ways you can go in jazz with the trumpet. Straight ahead and then a sharp left turn into more experimental improvisation paging (Miles Davis), a technically proficient if somewhat rigid traditionalist (Wynton Marsalis) or become a tasty, if unmemorable ingredient in the smooth jazz gumbo (Chuck Mangione).

These are the career choices Rick Braun may have faced at one time. He chose to go the path of least resistance and play it safe and make no mistake about it, Around The Horn is as safe as it gets.

Braun is thoroughly professional and a polished trumpet player, but he's more in the vein of Mangione than Davis and that's fine because there's room for the mainstream as well as the trend setters. Braun is not going to go off on a ten-minute free-form solo blowing, bleating and squawking his brains out. That's not what he does so he does what Rick Braun does and make solid, workmanlike music.

What Braun does do is make perfectly acceptable mainstream jazz music. The songs are catchy and rarely memorable. The arrangement and production doesn't break new ground as much as it covers a well-trod path. Braun's playing never veers into into outright parody of jazz like Mangione, but the unvarying sameness of the songs means its usually the soloists like newcomer Lindsay Webster's vocal turn on "Love Take Me" or old pro Peter White stopping by to add some guitar sweeteningto "We Don't Talk Anymore" and "Vila Vita," but it doesn't lift the overall recording beyond competent to exceptional.

"Pool Dancer" is lively, but its not as lively as Braun thinks it is and "We Don't Talk Anymore" is nice, but the psuedo-funk of "Everything Is Alright" is just plain corny. The cover of Coldplay's "Yellow" is pretty and so is the closer, "One South Beach Night" until you realize it sounds just like "Love Take Me" and only the title is different, which is sort of pulling a fast one by Braun, but hey, whatever.

All n' all, Braun has made a perfectly acceptable album of contemporary smooth jazz and if you're into that sort of thing you might even enjoy it, but will you remember any of it after it stops playing? If your expectations are this will be pleasant, but not particulary adventuresome, those expectations will be met with Around The Horn. It's not bad enough to actively dislike and not good enough to merit a rave. This one Is okay and sometimes okay is as good as it gets.

So Strong; Pool Dancer; Love Take Me; We Don’t Talk Anymore; Everything Is Alright; In Common; I Love You More; Around The Horn; Vila Vita; Yellow; One South Beach Night