BY ROBERT IANNAPOLLO
May 28, 2009
Sign in to view read count 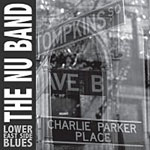 To those who thought The Nu Band was a one-shot group, witness Lower East Side Blues, its fourth album since 2003 and first recorded in a studio. With such busy schedules it seemed as if four musicians of this caliber—trumpeter Roy Campbell, alto saxophonist/ clarinetist Mark Whitecage, bassist Joe Fonda and drummer Lou Grassi—couldn't stay together very long. That they now have several international tours behind them and have a burgeoning discography is an indication of their level of commitment.

They run the band like a co-operative with each member contributing compositions. These are well chosen and tend to play to the strengths of the individuals, even if they weren't originally written specifically for the group. Campbell's title track opens the proceedings with a smartly bopping head, kept afloat by Grassi with an Ed Blackwell-like buoyancy that allows Campbell and Whitecage to fly over the changes with ease. The Fonda composition "In A Whitecage" highlights its dedicatee's clarinet work, it's matched beautifully by Campbell's smoky muted trumpet. Incidentally, Campbell uses the mute extensively on this disc and to great advantage. Whitecage's "Connecticut Solution" emphasizes the entire group with its closely harmonized mysterioso theme and lopsided 5/4 gait. Grassi's "Avanti Galoppi" chugs along on Fonda's ostinato pattern and demonstrates his driving contributions to the band. Having the horns play the theme in half-time over the double-time of the rhythm section creates a nice tension.

The Nu Band sounds like four musicians who genuinely enjoy playing together. And Lower East Side Blues has all of the heat, drama and high-quality improvising that makes a jazz recording worth hearing.

Lower Eastside Blues; In A Whitecage - The Path; Connecticut Solution; The Last Of The Beboppers; Heavenly Ascending; Avanti Galoppi; Like Sonny.