Maximize your visibility at All About Jazz by upgrading your musician page from standard to premium. With it, you'll receive All About Jazz home page exposure, a highly stylized / ad-free musician page with bonus features and benefits, an ad, plus you control where you sell your music and so much more.
Learn More
380 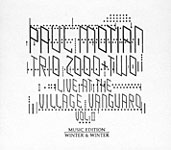 This is indoor music: music for contemplating, sitting and smoking, letting it smolder in the ears and grow. Paul Motian, the veteran drummer whose mature, idiosyncratic percussive language has been shaped by years of playing with Bill Evans, Paul Bley, Keith Jarrett and others, shines on this album: he seems completely at home, considered, even slow at some points. Nearly a generation after he recorded the legendary session at the Village Vanguard with Evans in 1961, Motian returned with his Trio 2000 ensemble, a group with FLY (bass) and Chris Potter (tenor saxophone). They were joined by "+ Two," really + Three: pianist Masabumi Kikuchi, alto saxophonist Greg Osby and violist Mat Maneri, though Osby or Maneri sit out while the other is playing. This music is very different from that of Evans all those years ago: less rhythmic and more percussive, less melodic and more tonal, less virtuosic and more personal.

This album was preceded by another tremendous release from the same run and it delivers more of the same; frankly one wonders why the two discs weren't released as a two-CD set. Motian's atmospheric, freely flowing drumming is perfectly paired with Kikuchi's highly chromatic harmonic underpinnings, turning standard (even hackneyed) tunes, such as "'Till We Meet Again" and "If You Could See Me Now," into emotional, angularly improvised compositions, usually featuring extended solos by Potter and Kikuchi. Motian and Grenadier often take a back seat, highlighting the interaction between Potter and Kikuchi, which reaches a climax in the transition between Motian's "Ten" and "Divider." (Listening with good headphones reveals Kikuchi's humming, which adds to the intensity of his improvisation.)

Maneri is less prevalent on this disc, appearing only on a few tracks; his solo on "Fiasco," however, is perfectly timed and blends very nicely with Potter's tenor. His viola's tone recalls a very dark Stephane Grappelli, had he been less obsessed with fast licks and more with expressive, unusual improvisation. That cool, creative sentiment dominates this album and makes it a true pleasure to digest.

Till we meet again; Sunflower; The third walk; Ten; The divider; If you could see me now; Fiasco.